Mitsubishi Has A Special Vehicles Department Now, Too 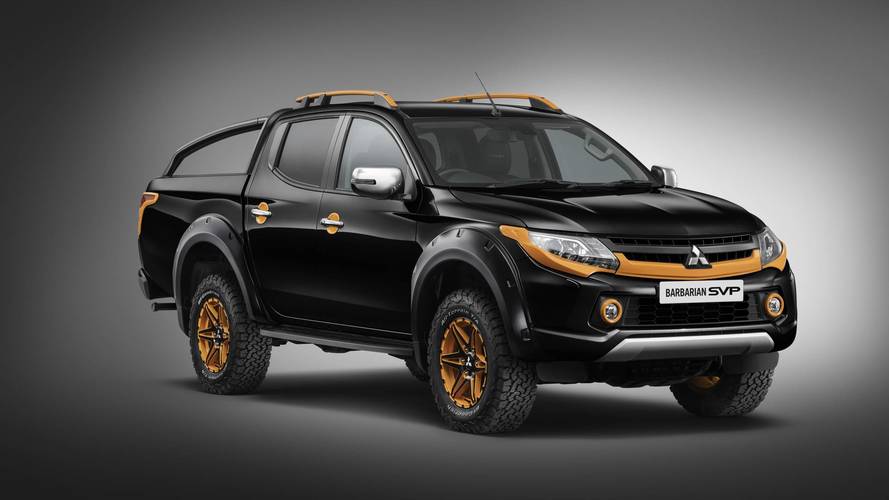 Mercedes, Nissan, Jaguar Land Rover... you can now add Mitsubishi to that list, because the Japanese brand now has its own back room at its factory for special edition cars.

The latest version to come out of Mitsubishi's skunkworks – called the SVP (Special Vehicle Projects) division – is the Barbarian SVP II, based on the L200 pickup truck and offered in the U.K. Like the first SVP-tweaked L200, the Barbarian sports a two-tone paint scheme offered in either pearlescent Diamond Black or metallic Atlantic Grey.

As well as the equipment that already comes as standard with the stock L200, the Barbarian adds 17-inch black and orange wheels wrapped in BF Goodrich all-terrain tires, bold wheel arch extensions to hide them, and a new SVP grille and roof rails, both of which are also finished in black and orange. There are also new fog lamp rings, front and rear light bezels, door handle recess covers, puddle lamps and tailgate handle surround – all finished in orange as well.

There's more orange on the interior too, with the "six-pack" leather seats with suede-like "Alston" inserts having orange accented paneling, stitching and piping. The floor mats come with orange accents too, as do the SVP badges, which are stitched into the seats.

Power comes from an all-aluminium 2.4-litre turbodiesel engine, which is connected to a six-speed manual or a five-speed automatic transmission with paddle shifters. The four-wheel-drive system is selective too, it can switch between two- and four-wheel-drive at speeds of up to 62 mph (100 kph) on all surfaces.

The Mitsubishi L200 Barbarian SVP II is available to order now in the U.K., with deliveries starting in May. Just 250 will be made, with prices starting from £29,830 (excluding value-added tax) - that works out to about $42,300 at current exchange rates

CIRENCESTER – Mitsubishi Motors in the UK is adding even more style and purpose to the multi award-winning Mitsubishi L200 with the unveiling of the new special edition Barbarian SVP II – the second vehicle to be produced by its SVP (Special Vehicle Projects) division.

The Mitsubishi L200 Barbarian SVP II builds on the success of the original limited edition SVP version and, like its predecessor, is instantly recognisable with a striking two-tone colour scheme and significant appearance changes to the exterior and interior.

Only 250 will be produced with half available in pearlescent Diamond Black and the other half in metallic Atlantic Grey. Details on either are picked out in orange to provide a striking contrast, ensuring the Mitsubishi L200 Barbarian SVP II stands out from the crowd in terms of road presence as well as exclusivity.

On top of the generous standard specification of the Mitsubishi L200 Barbarian Double Cab, the new special edition adds a host of eye-catching extras. On the outside, the pickup features 17-inch bespoke black and orange alloy wheels with BF Goodrich all-terrain tyres, covered by aggressive wheel arch extensions, together with a new SVP grille and roof rails, both of which are also finished in black and orange.

The fog lamp rings, front and rear light bezels, door handle recess covers, puddle lamps and tailgate handle surround are all picked out in orange. SVP tailgate badging, a colour-coded bumper and shark fin-inspired black side steps complete the distinctive look, while for added convenience there are the additions of load bed illumination and a spring-assisted tailgate with soft-opening damper.

The special colour scheme is carried over into the interior, the Barbarian-inspired ‘six-pack’ leather seats with suede-like ‘Alston’ inserts having orange accented panelling, stitching and piping. Each SVP II’s individual limited edition number, plus the SVP logo, is stitched into the headrests and there’s also a unique ‘SVP’ embossed mat set with orange piping. The distinctive theme continues with orange illuminated door entry guards and front and rear foot-well mood lighting.

Power is provided by an all-aluminium 2.4-litre turbodiesel engine, while the rotary-dial controlled Super Select 4WD system, which allows drivers to seamlessly switch between two- and four-wheel drive at speeds of up to 62 mph on all surfaces, can be combined with a six-speed manual or a five-speed automatic transmission with steering-wheel paddle shifters.

The Mitsubishi L200 Barbarian SVP II is available to order now, with the first deliveries commencing in May, and is priced from £29,830 (excluding VAT) for both grey and black versions.