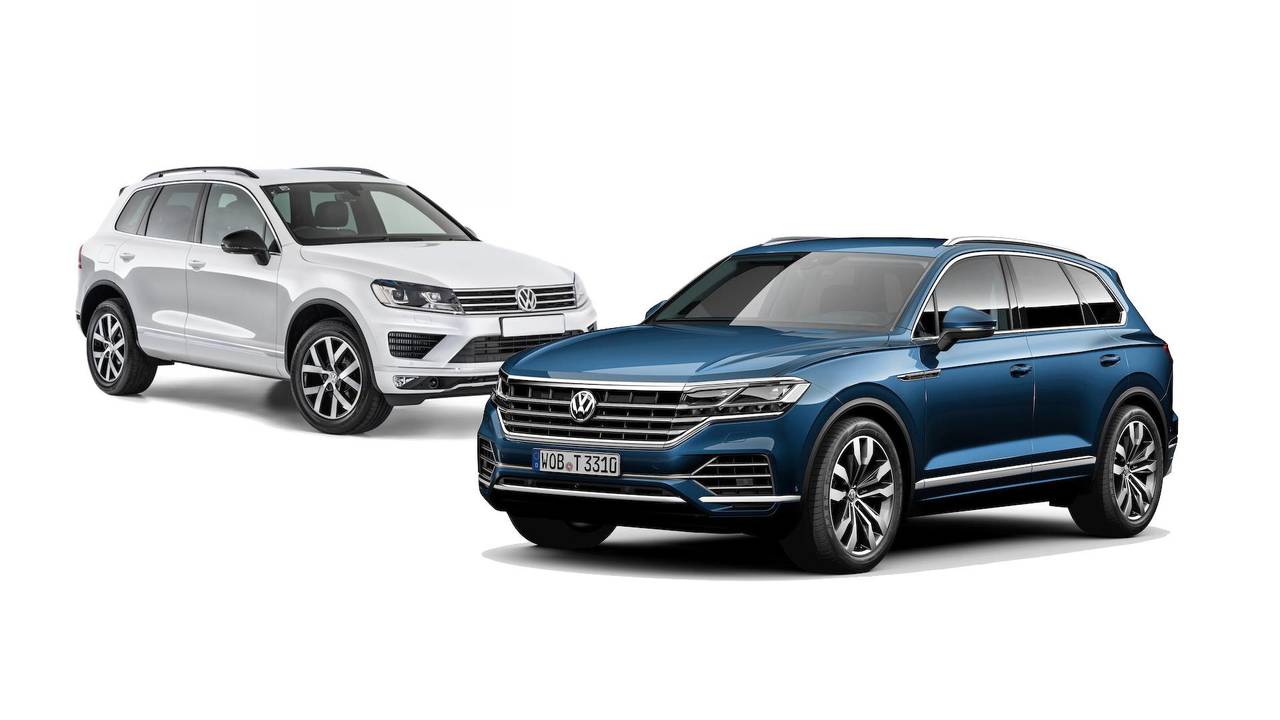 The Touareg is lighter, bolder, and better looking; here's how it stacks up against the outgoing model.

The Volkswagen Touareg is all new. Even though we won’t get it in the U.S., we’ve been delving into what makes the new one such a big leap forward. With a bold design, a lighter body, and a more futuristic cabin, it serves as the German marque’s European flagship. The Touareg rides on the same MLB Evo platform that underpins SUVs like the Audi Q7 and Porsche Cayenne, and comes powered by a pair of 3.0-liter V6 diesels rated at 231 horsepower (170 kilowatts) and 286 hp (210 kW). A gas-powered V6 and a plug-in hybrid option will eventually join the range. With all those updates in mind, here’s how the new model stacks up visually against its outgoing counterpart.

Put the new Touareg alongside the outgoing model, and it’s obvious that the SUV has undergone a significant redesign on the front fascia. The new look mimics the Arteon with headlights that are "connected" to the larger, more sculpted grille, giving the Touareg a unique style over its other high-riding VW siblings.

Two smaller vents are located on the lower portion of the fascia, and those too are larger and more accented than the same set found on the outgoing version. The new Touareg ditches the fog lots on the bottom of the fascia, and adds a set of embedded LED running lights along the lower portion of the matrix headlights instead. Combined, VW calls them the most advanced headlights on the market.

In the rear, the new Touareg has undergone a minor evolution. Like the Arteon, the Touareg logo is now displayed prominently across the center of the trunk lid, and is highlighted by new LED taillight fixtures. The back window appears to be smaller than the previous model, thanks in part to the new platform, and a larger red reflector stretches across nearly the entirety of the bumper. The dual exhaust tips and the diffuser have also been significantly restyled.

It’s easy to see that the new Touareg is far more chiseled than the previous version. The nose is sharper, the rear window is more raked, and the profile is more defined with a large crease that runs nearly the length of the body, from the front side vent to the taillight. There’s also a small fixed glass area near the A-pillar which further emphasizes the Touareg’s larger proportions. The new SUV rides on a set of base 18-inch wheels – up a whole size from the previous model – with a larger set of 21-inch wheel available on the high-end trim levels.

From top to bottom, the interior of the SUV has been significantly restyled. A fully digital 12-inch instrument cluster with a massive 15-inch touchscreen replaces the eight-inch touchscreen found on the outgoing model. The air vents are now lower on the center console, and most of the buttons have been ditched in place of a touchscreen-only setup. Overall, the cabin is far sharper than the outgoing Touareg, and gains a number of new upscale materials to boot.