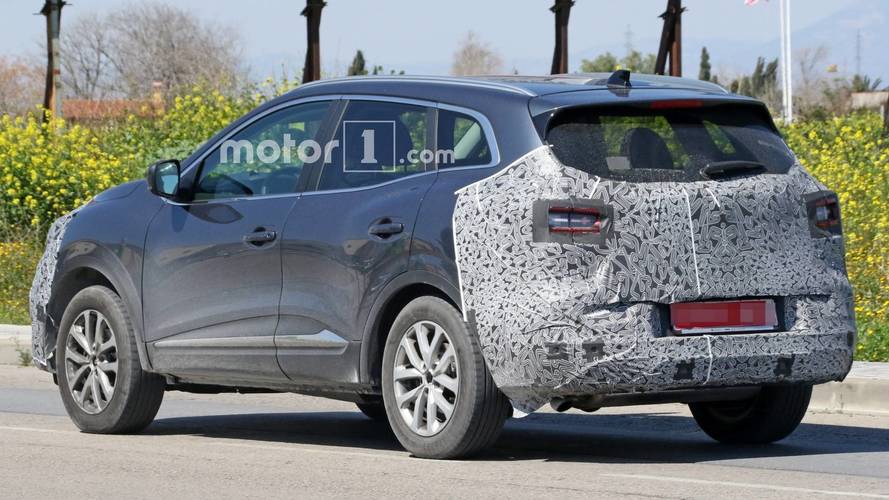 Nissan Qashqai's French brother is preparing for nip and tuck.

Earlier this month we saw Renault testing a weird Kadjar prototype with wider wheel arches, and now another trial vehicle from the same model has been spied. This time however it’s a regular Kadjar covered only with camouflage foil.

This is actually our first look at the facelifted version of Renault’s second-largest SUV for the European market. The disguise on the front end suggests the French marque will give its model a new fascia with revised radiator grille and new graphics for the headlights. The front bumper will also undergo a slight redesign and will receive reshaped fog lamps.

At the back, the shape of the taillights appears to be unchanged, but at least we could expect new 3D graphics for the LED clusters.

Our spy photographers point out the dashboard of the car is also covered in camouflage, and this could mean Renault is preparing some upgrades for the cabin, too. Most likely, we will be dealing with a new infotainment system with larger touchscreen display, which will be combined with a number of additional safety and assist electronic systems.

Nissan Qashqai’s slightly larger brother is currently offered in Europe with a choice of two diesel engines, the 1.5-liter dCi with 110 horsepower (82 kilowatts) and the more powerful 1.6-liter dCi with 130 hp (97 kW). There’s also a 1.2-liter turbocharged gasoline motor. Depending on the engine option, power is channeled to the front wheels through a six-speed manual gearbox or a six-speed dual-clutch automatic. Weirdly enough, an AWD system is available only with the manual.

We don’t expect to see major changes in the powertrain lineup, but it shouldn’t come as a surprise if Renault decides to launch the new 1.3-liter turbo engine for the model. Developed in cooperation with Daimler, it’s much more efficient than the current 1.2 turbo and is available in three power stages – 115 hp (85 kW), 140 hp (103 kW), and 160 hp (120 kW).