2019 BMW 3 Series Sedans Spied On The Streets Of Munich 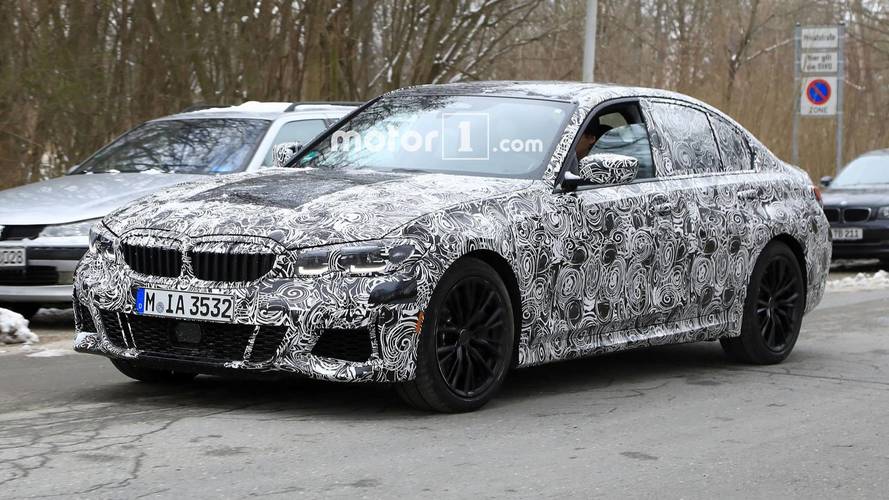 There appears to be a standard and M-Sport model in the mix.

Our spy photographers have caught up to the new BMW 3 Series once again. The last time we saw the camo-wrapped sedan it was rolling in standard and M-Sport guise, and it looks like we’ve caught another such duo testing on the streets of Munich.

Take a close look below at the model wearing the 3532 number plate – the front fascia has less wrap and is decidedly more aggressive, and the rear fascia wears extra vents on the corners. The exhaust cutouts are now different as well, adopting a more trapezoid shape. Compare that to the prototype with the 3489 number plate – the front fascia is far less dynamic and the rear also wears the familiar oval dual exhaust outlets without the vents.

The camo wrap hasn’t diminished since the last time we caught the new 3 Series in action, but the new cutouts on the rear bumper suggest we could be seeing final production components in place. And that means we could be getting closer to a full-on reveal, though we’re still hearing that the Paris Motor Show in October is when the covers will likely be lifted. When that happens, expect to see a car with better refinement, tasteful styling, and a range of engines from 136 horsepower (101 kilowatts) to 380 hp (283 kW), burning both gasoline and diesel.

The BMW 3 Series has long set the standard for athletic-yet-elegant sedans, but these days Audi and Mercedes-Benz offer extremely good competition for the iconic model. Our insiders in the industry say that BMW is keen to set this new 3 Series apart not through eye-catching bling like big wheels or ultra-engineered LED headlights, but by less tangible factors such as substance and character. We admit to being a bit underwhelmed with the current 3 Series, but with the next generation benefitting from BMW’s CLAR architecture, there’s hope the sedan could reclaim some of its former glory.