Driver and vehicle still not believed to be at fault.

UPDATE: Police have now released dashcam footage from the vehicle. The clip from ABC 15 Arizona is edited so as to not show the fatal impact, but view with caution as the clip could be upsetting. Visibility is certainly very poor and the pedestrian isn't visible until the vehicle is nearly upon her. However, it doesn't appear she suddenly stepped into the road, and we can't help but wonder why the vehicle's autonomous systems didn't detect her since things like radar shouldn't be affected by darkness.

UPDATE 2: In a discussion with the San Francisco Chronicle, Tempe's police chief said evidence so far suggested that the autonomous Uber vehicle was not at fault for the accident. "It’s very clear it would have been difficult to avoid this collision in any kind of mode (autonomous or human-driven) based on how she came from the shadows right into the roadway,” the chief told the newspaper.

Police have access to two videos of the accident. One shows the road in front of the SUV, and the other observes the driver.

An autonomous Uber vehicle in Arizona was involved in a deadly collision early Monday morning that left one pedestrian dead. One of the company’s autonomous Volvo XC90’s struck a female pedestrian, according to The New York Times, who crossed in front of the vehicle outside of a crosswalk. The woman was taken to a local area hospital but later died as a result of her injuries.

The incident occurred in Tempe, near Mill Avenue and Curry Road, according to local police. The vehicle was in autonomous mode with a safety driver behind the wheel when it struck a woman crossing the street outside of a crosswalk. It’s the first known fatally of a pedestrian involving a self-driving vehicle.

Following the incident, Uber has temporarily pulled its entire autonomous vehicle fleet off the road, not just in Arizona, but also in other major cities where the tech company was operating, including San Francisco, Pittsburgh, and Toronto. Uber CEO Dara Khosrowshahi tweeted out his condolences to the family of the victim:

The company released a statement that it will be working with local police to figure out exactly what went wrong:

“Our hearts go out to the victim’s family. We are fully cooperating with local authorities in their investigation of this incident.” 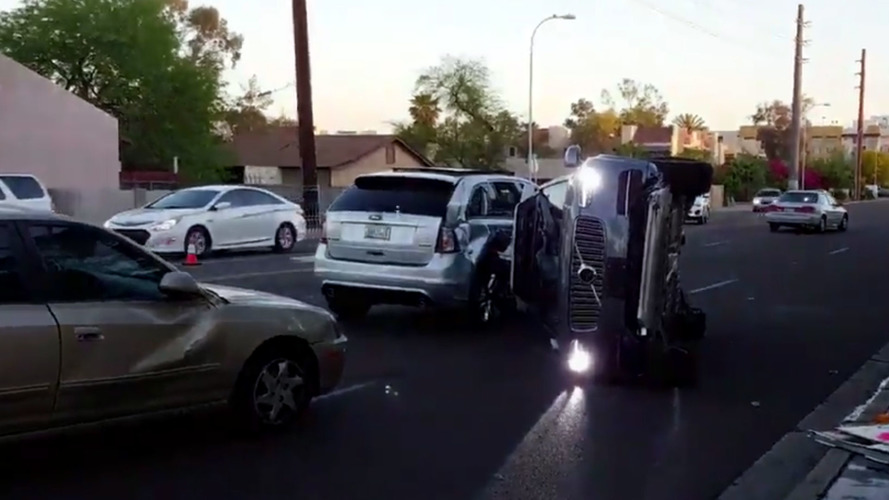 In March 2017, another of Uber's autonomous Volvos testing in Tempe was part of a three-car accident, resulting in the autonomous SUV ending up on its side. A police investigation found that the autonomous XC90 wasn't at fault. Instead, another vehicle failed to yield and was responsible for the collision. Uber still responded by temporarily stopping autonomous development nationwide while examining the incident.