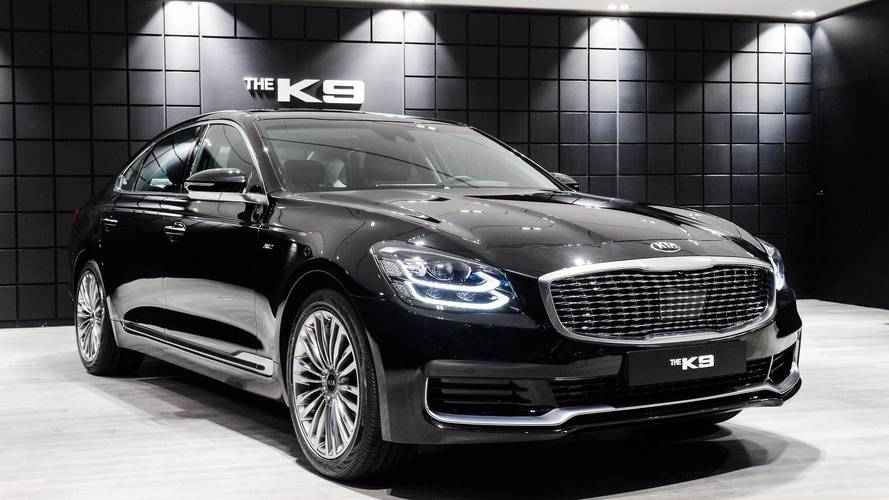 The full brochure from South Korea offers a great preview of what to expect.

[UPDATE, March 20] Live images from the reveal event in South Korea have been added. The press release has been included as well. Compared to its predecessor, the new K9 / K900 has a longer wheelbase (+2.3 inches or 60 millimeters) at 122.2 inches (3,105 millimeters), along with shorter front and rear overhangs.

Kia will unveil the next-generation K900 at the New York Auto Show. You don't have to wait until the end of March to see it, though, because the new sedan's brochure is already available in the South Korean market. In its home country, Kia calls the model the K9, but the name is shorthand for a dog in many places, which forces a change in monikers.

Compared to the current K900, the new generation features headlights with arcing LEDs inside of them. There's lots of chrome in front, including the grille mesh, surround, and lower fascia trim. The profile features a mix of a long hood and short rear deck. Even more shiny chrome festoons the window surrounds, side mirrors, and long the lower body. At the rear, the taillights feature LED arches that echo the elements of the illumination in front.

Unfortunately, these elements combine to create a fairly bland looking sedan. From a company that can create a four-door as attractive as the Stinger, this is a disappointment.

Inside, a gargantuan, widescreen infotainment system dominates the cabin, and a rotary dial on the console appears to control it. Metallic buttons handle the rest of the driver's commands. A mix of leather and wood decorate the interior. The brochure shows that buyers can get red, beige, black, and brown upholstery options.

Kia's South Korean brochure only lists the engine options but doesn't provide the outputs. Buyers can get 3.3-liter or 3.8-liter V6 mills, and a 5.0-liter V8 tops the range. The V6 options are available with all-wheel drive, but there's no mention of it for the V8. An eight-speed automatic is the only listed gearbox.

The existing K900 is Kia's lowest volume vehicle in the U.S. with just 455 deliveries in 2017 and 834 for the year prior. Perhaps a new generation can revive interest in the brand's big, premium sedan.