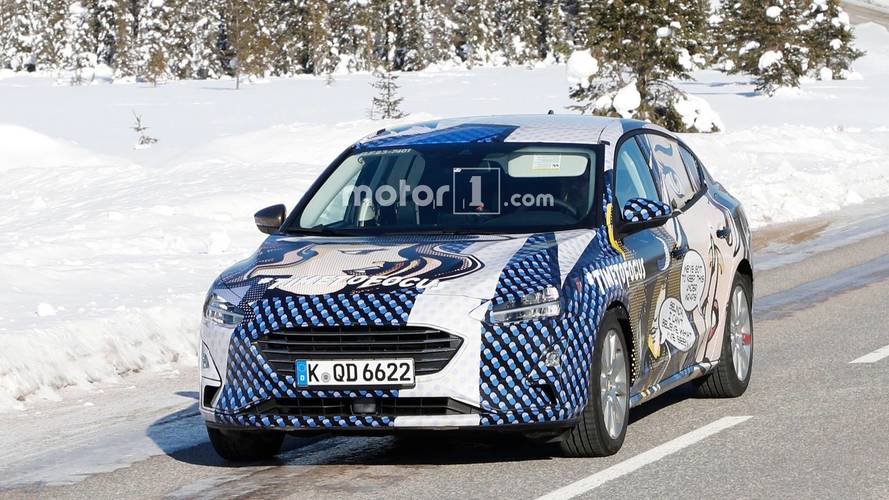 The car looks good, but we want to know more about Belinda.

Ford certainly has an interesting approach to “hiding” its new 2019 Focus while testing. Granted that testing period is almost up; Ford is expected to debut the new car at a special event sometime in April but we still don’t know the exact date. Still, it’s a rather bold move to not just opt for wacky color-filled wraps, but to go full-on comic book with some cheeky car-size dialogue between a film-noir type dude and a woman known only as Belinda. Seriously, see for yourself.

There’s a bit of brilliance here on Ford’s part, because secret cars wearing camouflage always attract attention. In the case of this new Focus, the updated styling isn’t necessarily rewriting the book on the model's history, so one may as well have some fun with the disguises while making good use of the free publicity, hence the #TimeToFocus hashtag we’ve seen on prototypes for months now.

We’ve seen quite a bit of the new Focus hatchback, but aside from introducing us to Belinda, these new shots gives a look at the well-proportioned lines of the new sedan. Sometimes smaller hatchbacks don’t transition well to sedan format, with Focus models of previous generations being prime examples. That doesn’t seem to be the case this time around, with the sloping roof contrasting with the up-turn beltline in a very satisfying manner.

Quite a bit of information on the next Focus has leaked in the last month or so. We know it’s going to be a bit longer that the current model, which should offer occupants a bit more legroom. It’s also expected to lose about 110 pounds (50 kilograms), and the sedan should launch at the same time as the hatchback. We don’t yet know much about engine options, but the hot RS is thought to be getting the hybrid treatment with as much as 400 horsepower (298 kilowatts) on tap.

The new Focus will debut next month, but with camo wraps as entertaining as this one, we wouldn’t mind waiting a bit longer.