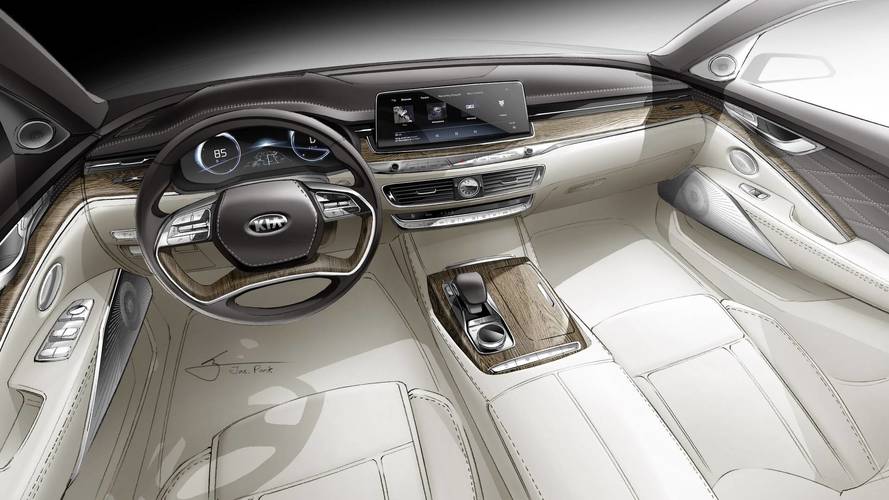 After giving us an idea about how the exterior will evolve for the company’s next-generation flagship, Kia has a new teaser depicting the interior of its all-new K900 scheduled to be unveiled sometime in April. Some big changes are in tow for the large and luxurious sedan as it looks like the model will be moved further upmarket by adopting a plushier interior with more leather, an abundance of wood (including on the steering wheel), and more technology than ever before.

Featuring a fully digital instrument cluster, the 2019 Kia K900 will have significantly fewer buttons on the dashboard as a result of integrating more of the functions and controls into the infotainment system. Measuring a generous 12.3 inches, the display sits on top of the center console, prompting Kia to move the air vents from the sides of the screen to right underneath it. There seem to be only two rows of buttons as the company wanted to go for that minimalist approach that’s getting more and more popular among automakers.

The new K900 will benefit from LED ambient and mood lighting in no less than 64 colors and seven selectable themes. Kia’s new range-topping model also features proximity sensors that upon sensing the driver is about to use a switch on the dashboard, these send out a command in order to increase illumination of the controls.

There seems to be leather just about everywhere you look, including for the top of the dashboard and also on the door panels. Wood and metallic veneers further strengthen the cabin’s upscale vibe, while the center console appears to be wider than before and seems to feature a split opening. A fancy sound system can also be noticeable, along with an analog clock flanked by the central air vents.

Just like the exterior, the cabin of Kia’s brand new K900 (Quoris in some countries, such as Russia) is the result of a joint effort between the company’s design studios in Namyang, Korea and Irvine, California. Like before, production of the fullsize sedan will take place at home in South Korea where the model is known as the K9, and sales are programmed to commence in the second half of the year in selected global markets