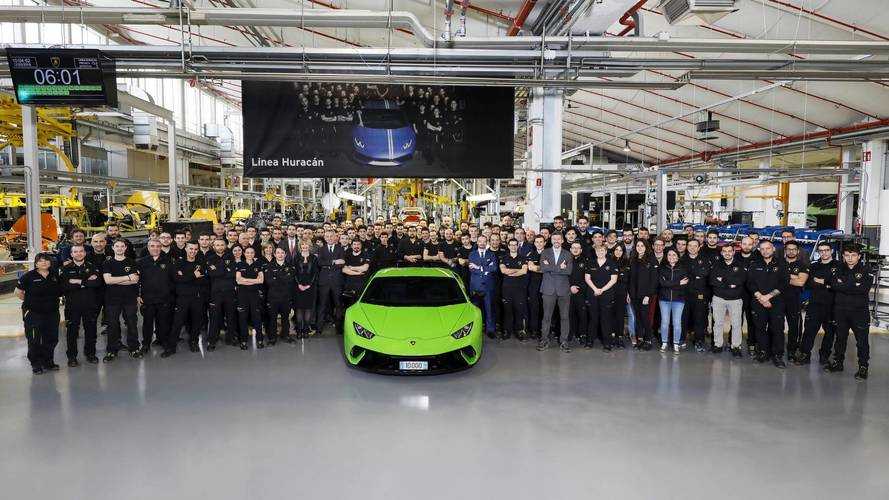 The successor will stick with the V10 engine and is going to spawn another rear-wheel-drive model.

Aside from being the hotter Performante version, the Huracan pictured above is quite special for another reason. Heading to a customer in Canada, the baby Lamborghini marks an important production milestone for the manufacturer based in Sant’Agata Bolognese as it’s the 10,000th Huracan built, four years since the debut of the Gallardo’s replacement.

The milestone car has received a special finish as a nod to Lamborghini’s GT3 triumph at the end of January in the grueling 24 Hours of Daytona endurance race. It wears the same striking Verde Mantis hue as the winning #11 Huracan GT3 that claimed top spot in its class at the famous Daytona International Speedway.

2017 was a very successful year for the Huracan and consequently for Lamborghini, with a whopping 2,642 units of the V10 machine rolling off the assembly line or 12 percent more than a year before. No less than six different derivatives are available right now, with the newcomer being the Huracan Performante Spyder pictured below and currently on display at the 2018 Geneva Motor Show.

In regards to the future, the company’s chief technical officer Maurizio Reggiani sat down and had a chat with Car and Driver about what’s up ahead for the company’s “entry-level” model. The good news is Lamborghini will keep the naturally aspirated V10 for the Huracan’s replacement and will continue to give customers the option of having to pick between all- and rear-wheel drive. Don’t expect an AWD system that turns into RWD at the press of a button like some other cars have (BMW M5, Mercedes-AMG E63 S) as that would represent a compromise not worth making:

“If you have an all-wheel-drive system and then press the button to go to two-wheel drive, you are carrying [88 pounds] that is doing nothing, and you have the same suspension setting for all-wheel drive, which is not correct.”

The fact that the V10 will solider on without forced induction doesn’t necessarily mean Lamborghini won’t be making any changes in the powertrain compartment. Reggiani hinted some form of electrification could be implemented as a way to meet the more stringent emissions regulations.

The Huracan has been around since 2014 and although in general life cycles last for 6-7 years, the rule doesn’t apply to high-end supercars as these are usually offered for a longer amount of time. Take for example the Gallardo, which was available for roughly a decade, so don’t expect Lamborghini to replace the Huracan until early into the next decade.

Sant’Agata Bolognese, 13 March 2018 – Lamborghini Huracán number 10,000 rolls off the assembly line, marking a production milestone for the V10 model of Lamborghini. Destined for a client in Canada, the Huracán Performante model pays homage to Lamborghini’s GT3 victory in the 2018 Daytona 24 hours race: the car sports the same Verde Mantis color as the winning #11 Huracán GT3 that took top class honors in January’s world-famous endurance competition at the Daytona International Speedway.
In 2017 Lamborghini achieved a record year with 3,815 cars delivered to customers worldwide, including 2,642 Huracán units leaving the factory in Sant’Agata Bolognese: an increase of 12% Huracán deliveries over 2016. Launched in 2014, Lamborghini’s V10 model is currently produced in six derivatives: the Huracán Performante that holds records at eight different circuits around the world, the Performante Spyder version unveiled this month at Geneva Motor Show, and the four-wheel and two-wheel drive versions in both coupé and Spyder configurations. The Huracán also features in motorsport, with the Huracán Super Trofeo as protagonist in Lamborghini’s four single-make series, and the Huracán GT3 competing in championships around the world.