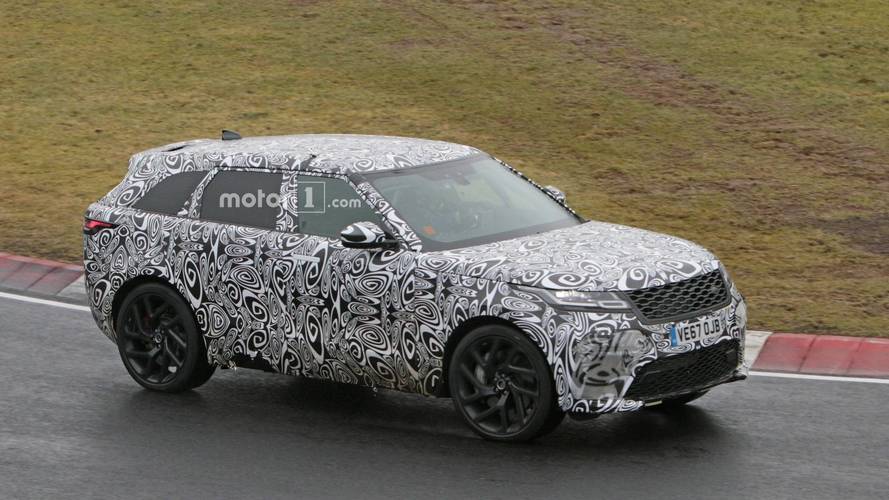 The SUV looks to combine style and performance in a single, luxurious package.

Land Rover has been caught again testing a high-performance SVR variant of the Velar around the rain-soaked Nürburgring. This one wears a massive set of black wheels, too.

This test mule features some aesthetic upgrades that visually advertise the extra performance. Up front, the company's camouflage doesn't hide the larger intakes at the corners of the front fascia. The water largely conceals the rear, but the circular exhausts outlets are a new addition, rather than the trapezoidal exits on the standard model. Unlike previous test mules, this one also features the Velar's recessed door handles, so the feature appears to be sticking around on the SVR.

The Velar SVR likely uses Jaguar Land Rover's 5.0-liter supercharged V8. In other models like the recently updated Range Rover Sport SVR, this mill produces 575 horsepower (429 kilowatts) and 516 pound-feet (700 Newton-meters) of torque. An eight-speed automatic routes the output to the company's all-wheel-drive system. The setup should be enough for the range-topping Velar to hit 60 miles per hour (96 kilometers per hour) in around 4 seconds.

The Velar SVR should arrive sometime in 2018. The SE is the existing range topper at a price of $67,400 before destination in the United States. Judging by the $16,950 price increase between the Autobiography and SVR trims for the Range Rover Sport, the quicker Velar could start at around $84,000 before adding any options.