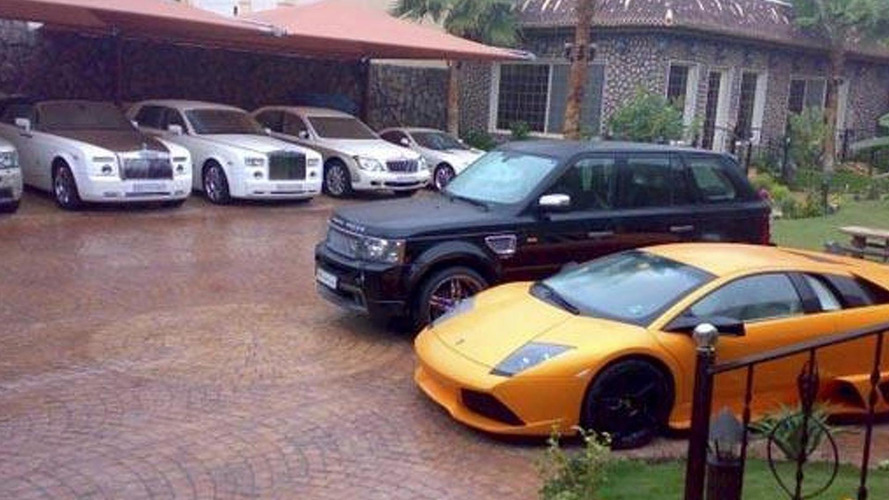 Working hard and striving to earn more money is the daily struggle of most middle-class workers around the world.  But for 21-year-old student Dhiaa Al-Essa, he has no such worries.

Son of a mega wealthy Saudi businessman, Dhiaa is the youngest person to own a collection of 30 supercar and luxury vehicles worth £4.5million at the young age of just 21.  The collection includes five Ferraris, five Porsches, three Lamborghinis, two Rolls Royces and a McLaren Mercedes to name a few.  But the list doesn't stop there.  Next year the value of his collection will double when he takes delivery of a Koenigsegg Agera for his 22nd birthday and a Bugatti Veyron – £1.6million.

There was supposed to be another highly anticipated arrival to the collection in the form of a Ferrari 458 Italia, but it was one of the 458s that suffered in a warehouse fire at Heathrow Airport.  Including customizations such as a Dolce and Gabbana interior, the 458 Italia was priced at £300,000, however Dhiaa received an inadequate compensation offer of only £30,000 by Emirates airlines and warehouse owner Servisair.  Dhia is considering legal action.

Dhiaa stated, "I won’t be getting another Ferrari 458 Italia. I think it was an unlucky car as I had to take it back to the dealer because of heating problems."

Dhiaa is currently studying for an engineering degree in Riyadh, his home town, but while on summer break many wealthy young adults from the Middle East travel to the United States and Europe to escape the scorching desert heat, and according to Dhiaa, the 75 mph speed limits in Saudi Arabia as well.

Dhiaa's father, whose empire extends into numerous businesses from real estate to stock markets, is paying the tab for his son's adventures which this summer include visits to London, Montreal, Las Vegas, Los Angeles and New York.

Check out the source link below for full story and list of Dhiaa's cars.