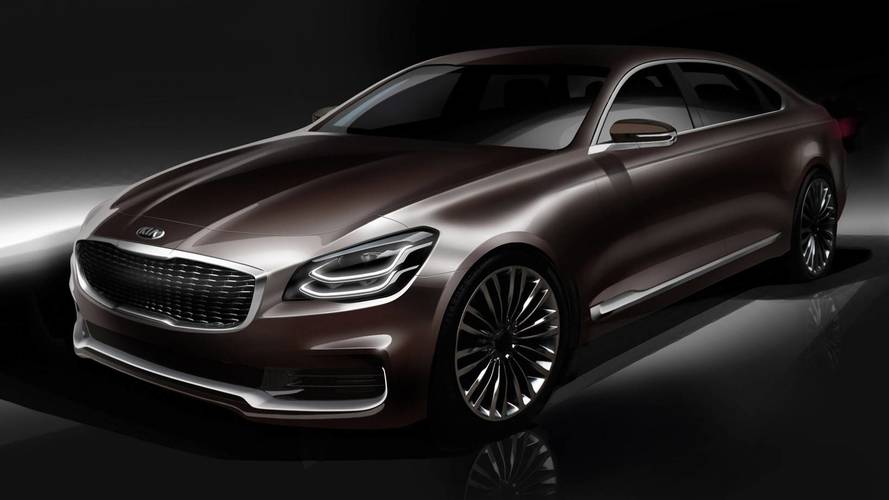 The real car will be revealed next month.

Kia is currently making a splash at the 2018 Geneva Motor Show with its new Ceed compact, but the automaker is keen to remind us what’s to come on the other end of the spectrum. A few teasers of Kia’s K900 flagship sedan have come out in recent weeks, and with the initial media blitz of Geneva winding down comes this latest teaser from the manufacturer – a pair of sketch renderings that preview the new sedan.

According to Kia, the K900s fresh styling is “sophisticated and stately” and “introduces a modern air of elegance and gravitas to the large sedan segment.” If that’s not abstract enough, the automaker goes on to say the car’s grille is conceptually based on the “changing shape of condensed energy” and that the car’s headlights are “influenced by the trajectory of light.” That last bit at least makes some sense considering headlights are, you know, supposed to light up and all.

In between the terrific imagery and complex metaphors, we do learn the K900’s tail lights and rear exhaust housings are surrounded by chrome, and the grille has 176 cells that stretch out the further away you get from the center. That’s actually something we’re keen to see on the real car, because it already looks pretty darned good in the render. Suddenly that whole condensed energy thing actually makes some sense, and with so many other luxury cars going for larger-than-life openings up front, the K900’s modest face just might be a breath of fresh air.

For that fact, the whole car looks pleasing. Renders like these aren’t always gospel when it comes to the actual production model, but the lines and proportions are attractive and they match up well with the profile teaser video (above) we got a few days ago. For the record, that featured the actual car. We're excited to see it all come together.

We won’t have too much longer to wait, either. Kia says a full reveal will take place next month.

Kia previews design of new K900 ahead of world debut

Sophisticated and stately, the K900 introduces a modern air of elegance and gravitas to the large sedan segment. Kia’s designers were inspired by the ‘Gravity of Prestige’ design concept, which exudes luxury and poise. Based conceptually on the the changing shape of condensed energy, a new ‘Quadric pattern’ signature grille is the focal point of the K900 and embodies the original design brief. There are 176 jewel-like ‘cells’ within the grille, suggestive of released energy accelerating away from its center. Natural, flowing lines emanate from this frontal area, rise over the hood, sweep through to the rear flanks and culminate at the rear.

Geometric design details add an element of modernity and high-technology. Influenced by the trajectory of light, the design of the ‘Duplex comet’ headlamp provides the K900 with a  visually progressive and luxurious image. In profile, a chrome flash adds visual depth to the smooth bodywork, running along the base of the doors and around the lower rear section of the K900. The chrome window-line adds a degree of technicality and structure to the free-flowing C-pillar before it merges with the rear deck. The tail lights and exhaust housings are also finished with chrome details.

The all-new Kia K900 will be manufactured in Korea and will go on sale across selected global markets from the second quarter of 2018.