Corbellati Missile Leaks Out Ahead Of Official Geneva Debut 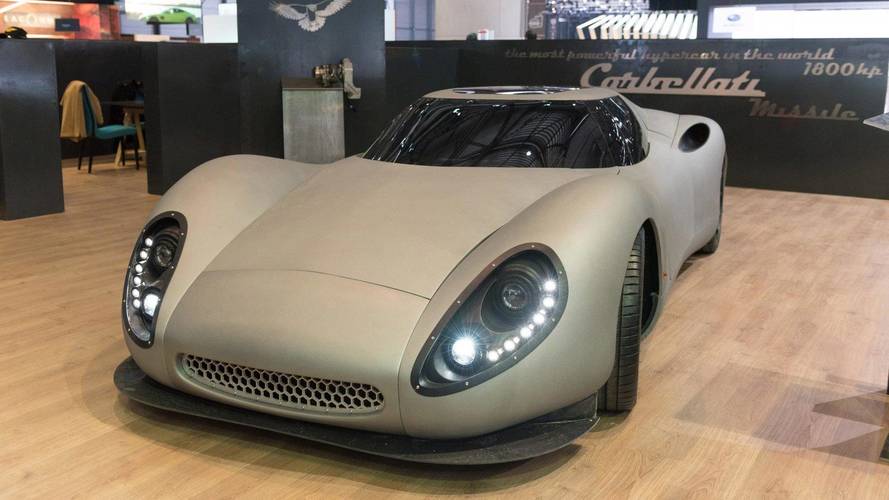 The company chooses a weird color for the exterior.

According to a running countdown on Corbellati's, the Missile supercar doesn't debut at the Geneva Motor Show until March 7, which is tomorrow as of this writing. However, if you're physically at the Swiss event, then you can see the vehicle right now because it's sitting uncovered at the brand's booth. Take a good look in the gallery below.

Rather than the glossy red shape on the coupe in earlier promo photos, the one currently on display wears oddly textured, silver paint. The material looks like it would be rough to the touch and makes the car appear unfinished.

To make the odd body finish even weirder, the Corbellati claims the Missile uses carbon fiber for all of its body panels. Therefore, the firm covered the exterior is this bizarre color on purpose, rather than even something simple like leaving the carbon weave exposed.

The Missile has an attractive exterior design that eschews the modern move toward more angular shapes in favor of a classic curvaceous look. It evokes Italian supercars of the 1960s without being overly retro.

According to the company's earlier teaser, the Missile uses a biturbo 9.0-liter V8 with a massive 1,800-horsepower (1,342-kilowatt) output. The mill can allegedly accelerate the hypercar to a practically unbelievable top speed of 310 miles per hour (498 kilometers per hour). A six-speed manual routes the power entirely to the rear wheels. Ceramic brakes allow adequate stopping power from such high velocities. Underneath the swoopy bodywork, the Missile uses a carbon fiber chassis. However, the teaser neglected to list the vehicle's weight.

These are very lofty performance claims from any company, particularly a newcomer to the auto market. The Corbellati family claims to have 70 years of history in the jewelry and fine art business, but the company's Website currently doesn't offer any details about firm's talents in the hypercar industry.