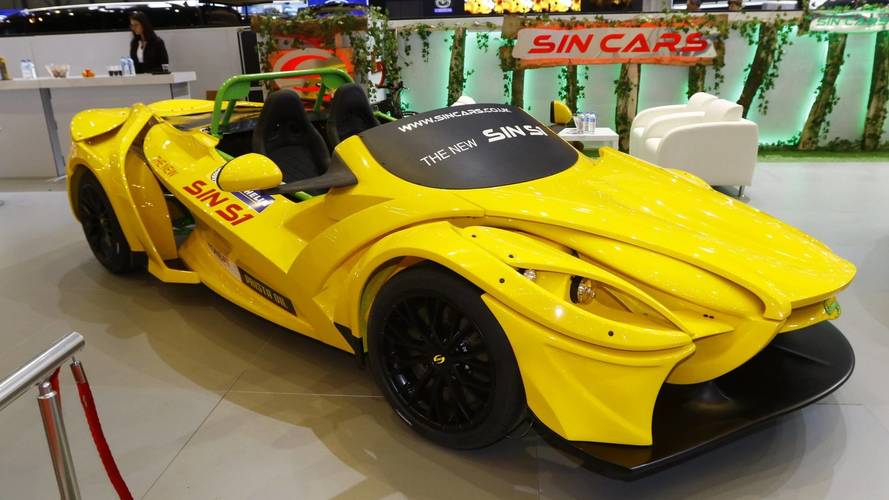 Perhaps now would be a good time to switch bodies.

[UPDATE, March 7] Live images from the Geneva Motor Show have been added at the beginning of the gallery, below.

One of the most bizarre debuts at the 2018 Geneva Motor Show is the Sin S1, and that’s saying a lot considering we’ve also seen a production-ready flying car on the show floor. Motor1.com readers might be more familiar with the other offering from Sin Cars, the more conventional R1 that actually has a permanent body over its General Motors-sourced V8. There’s even a hybrid version of the machine that can place up to 800 horsepower under the driver’s right foot.

The S1, however, isn’t like that. In fact, it’s unlike anything else out there, not even itself. That's because Sin advertises the S1 as an “affordably priced modular car,” though with prices starting at $49,900 we’re not sure how many people will find it affordable. We can say it’s definitely modular, and by that we mean it’s a basic chassis that can wear different bodies, different interior layouts, and different drive train options. And we’re not just talking about the initial ordering process – Sin says S1 owners can start with one configuration, then change to another at a later date. The components are interchangeable, or at least, as interchangeable as swapping entire engines and body panels can be.

The idea of a single chassis that can wear different bodies isn’t new. We’ve seen a few concepts over the years that propose offering family-style SUV accommodations through the week, then switch to a svelte convertible for the weekend. With the S1, however, everything is centered around performance. Sin suggests configuring the S1 as an open-cockpit track day car, or an open-wheel track day car, or a full-bodied track day car. After awhile, you get the sense that the S1 is destined to be a track day car no matter how you make it look.

Up until today we’ve only seen a single teaser sketch depicting a roofless, doorless roadster.  As you can see from the photos, the S1 has made an official appearance in Geneva as a roofless, doorless roadster, and to be honest, we’re not entirely sold on this particular configuration. Maybe that’s the point – if you don’t like the car you bought, just change the body until something strikes your fancy.

Sin hasn’t released information on just how easy it is to swap bodies, interiors, and drive line components. It’s certainly an interesting idea, but time will tell if this idea is interesting enough to attract buyers.