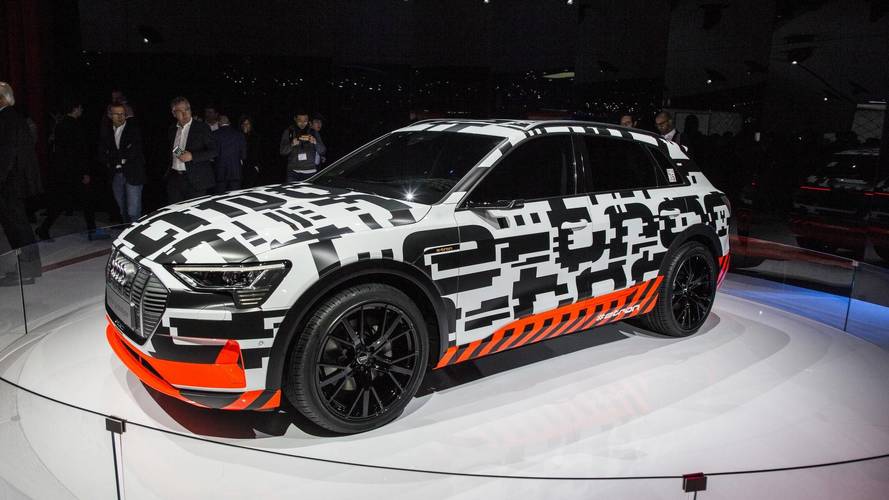 And now, 250 prototypes will set out for a combined 3.1 million miles of testing.

It’s no secret that Audi is working hard on an all-electric SUV, and now the Geneva Motor Show is our chance to see it – or at least prototypes wearing funky digital-camo graphics. These Audi E-Tron prototypes are, nonetheless, our best look yet at Audi’s future EV.

While the basic shape is similar to what we’ve seen in spy photos already, both on public roads and even at the Nürburgring. It’s a stylish crossover, with Audi’s familiar polygonal grille shape, squinty headlights, and full-width LED taillight strips all in view. Specifically, the orange-and-black trim around the lower part of these prototypes highlights where the battery pack resides, with the color hinting at the colors used to highlight high-voltage cabling.

We’re still waiting on solid numbers in terms of range or battery performance for the Audi E-Tron, but the automaker does say that the crossover can recharge at a high-speed charger in just 30 minutes, and that it will have all-wheel drive – as is expected of anything with the four-ring logo. The company also says that the “comfortable, spacious interior” will make it ideal “for everyday use,” which would seem like a given for any Audi model.

Reports suggest a driving range of 500 kilometers/311 miles, with two electric motors – one at the front, one at the back – to provide AWD. So far, Audi has said only that the driving range will be, “suitable for longer journeys.”

Audi now plans to send 250 prototypes on a round-the-world testing regimen that will cover 3.1 million miles on four continents, in temperature extremes from -4 degrees to 122 degrees Fahrenheit. That’s exactly the sort of test regime one would expect for any new vehicle, of course.

Although the car shown in Geneva is only a prototype, Audi plans to put the E-Tron on sale in Europe by the end of this year. And by 2020, it will be joined by a production version of the rakish E-Tron Sportback concept, as well as “a model in the compact segment.” The E-Tron electric cars will be built at an Audi plant in Brussels, Belgium.

When the Audi E-Tron hits the market, it will compete with the Tesla Model X, as well as the newly announced Jaguar I-Pace electric crossover. Jag’s EV, for its part, will start at $70,495 in the U.S. and is expected to offer a 240-mile driving range.

Audi unveils the prototype for its first all-electric model at the Geneva Motor Show. The sporty SUV combines the space and comfort of a typical luxury car with a range suitable for everyday use. Until the start of series production, almost 250 development vehicles will complete testing under extreme conditions worldwide. Specially camouflaged prototypes kick off the chase for the most spectacular photos.

The Audi e-tron prototype offers a preview of the first all-electric model from the brand with the four rings. The camouflaged exterior conceals a sporty premium SUV with space for five people along with plenty of luggage – the space and comfort are similar to that of a typical Audi luxury class model. The range suitable for longer journeys and the comprehensive charging options allow customers to drive purely electrically without making compromises. The production version of the Audi e-tron prototype can fill up on electricity at fast-charging stations with up to 150 kW charging capacity. In just under 30 minutes, the SUV is then ready for the next leg of the long-distance journey. The electrical quattro catapults the four-wheel drive into a new age and ensures strong performance on any terrain. The production version of the Audi e-tron will be launched on the European market at the end of 2018. The car is produced at the carbon-neutral plant in Brussels.

“Audi sets an important milestone for the company’s future with its first purely electrically powered model,” said Rupert Stadler, Chairman of the Board of Management of AUDI AG. “In 2020 we will have three all-electric vehicles in our product range, with a four-door Gran Turismo – the production version of the Audi e-tron Sportback concept – and a model in the compact segment joining the sporty SUV. We will be launching more than 20 electric cars and plug-in hybrids by 2025 – spread across all segments and concepts,” the Audi CEO explains.

The Audi e-tron prototype does not wear the traditional prototype camouflage, but instead illustrates its electrification with a specially developed design film. The distorted e-tron lettering stretches across the entire flank, as if it was charged with electricity. The “e” winds its way around the tailgate at the height of the front fender and is literally electrifying. Mimicking the high-voltage grid, orange elements illustrate the fact that the Audi e-tron prototype is fully electric – the lower part of the car, for example, is encircled with alternating orange and black segments. The expressive sills, with their colorful inserts, indicate where the battery and therefore energy center of the car are located.

Until the first electric model of the brand with the four rings is launched at the end of the year, the sporty SUV will complete test drives on four continents. Whether in the cold of Scandinavia or the heat of Africa, in the mountainous altitudes of Asia or on the north loop of the Nürburgring, in the stop-and-go traffic of major Chinese cities or on American highways – the purely electrically powered SUV has to prove its all-round qualities in uncompromising practical tests under extreme conditions. Audi is testing the pre-series vehicles for customer-focused operation in all climate zones ranging from below -20 to above +50 degrees Celsius (-4° to +122° F). In addition, intensive tests of the charging technology are being conducted worldwide – an important safeguarding criterion for battery-electric models. The individual charging standards are tested on proving grounds and in public areas to validate the full range of different charging options. In total, just under 250 Audi e-tron prototypes are used in the tests. They will cover more than five million kilometers (3,106,856 mi) – roughly equivalent to 125 times around the earth and 85,000 hours on the road.