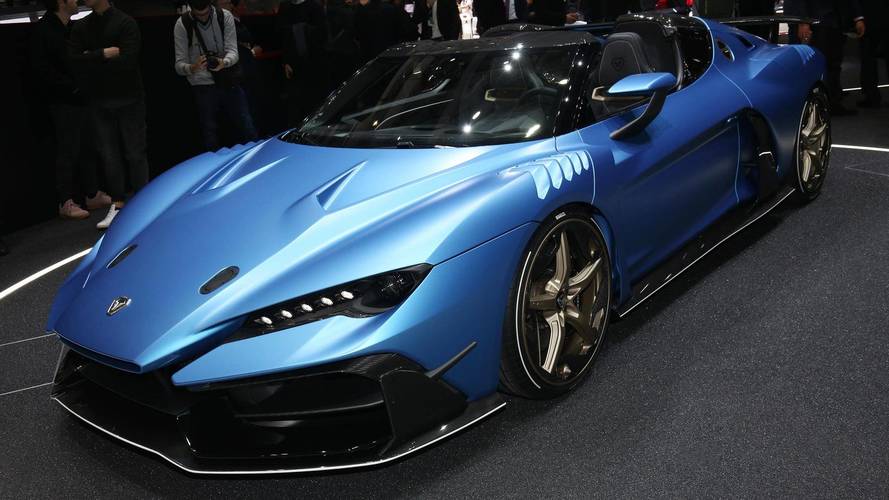 It's everything you love about the original Zerouno, but with more fresh air in the cockpit.

Only five people bought the hardtop version of the edgy-yet-excellent Italdesign Zerouno. Some might say the $1.6 million asking price was just too excessive to sell more, but actually, Italdesign only made five all total. That makes the Zerouno extremely exclusive, and now we have the roofless version to behold. It’s officially called the Zerouno Duerta, and like the hardtop, only five examples of this exquisite roadster will be built.

To refresh your memory, the Zerouno is essentially an Audi R8 beneath an all-new carbon-fiber skin and interior that’s hand-crafted, and we do mean literally by hand. In converting the Zerouno to a roadster, Italdesign did more than just cut off the roof – the rear cockpit and engine cover were completely redesigned to ensure the Duerta was as structurally sound as the standard Zerouno. A pair of roll bars for the occupants were added, and the engine cover has a lowered center portion.

Italdesign doesn’t mention how much weight was added in this strengthening process, but the company says the Duerta has all the performance of the Zerouno without making any compromises. That means a top speed “over 320 km/h” (199 mph), which is technically comparable to the hard top but leaves room for interpretation since the hardtop Zerouno reaches 330 km/h (205 mph). The engine remains the same –  a familiar Audi 5.2-liter V10 mounted midship that produces a naturally-aspirated 610 horsepower (455 Kw).

Speaking of which, the Duerta’s removable targa roof is supplemented by a stowed fabric top that can be installed while out-and-about, just in case inclement weather strikes. Considering only five cars will be built, we doubt any will see daylight when such conditions are even a remote possibility. That’s especially true when you consider the Duerta’s price, which technically isn’t mentioned by Italdesign but is reported to be approximately $2.4 million.

Italdesign plans to build all five Duertas by the end of 2018, each customized per the direction of the buyer.

ZEROUNO DUERTA AT A GLANCE

• The targa-top version marks the second chapter of the Automobili
Speciali project, launched in 2017
• Five units will be built by the end of 2018
• Racing performance in a street-legal vehicle
• Modular carbon-fibre and aluminium chassis, a redesign of the coupé
version
• Ultra-lightweight 100% carbon-fibre bodywork
• Removable carbon hardtop
• Same performance as the coupé version: naturally aspirated 5.2-litre V10
engine, top speed over 320 km/h
• Special packages are available for custom finish and performance
• Designed, engineered and produced by Italdesign

Created in 2017 and premiered worldwide at the Geneva International Motor Show, Automobili
Speciali is the new Italdesign brand associated with the production of exclusive ultra-low series cars intended
for collectors.

“One year later, Zerouno has proved successful,” explained Jörg Astalosch, CEO of Italdesign.
“All five vehicles were sold in just a few months after they were officially presented, showing that car and
design enthusiasts continue to desire exclusive products of this kind.

"We had stated that Zerouno was not merely an end in itself, nor an experiment,” Astalosch
continued. “Rather, it is a new service that complements what Italdesign has been offering to the global
transportation industry for 50 years. The brand Automobili Speciali will continue beyond this targa-top
version of the Zerouno. We are excited to unveil the Zerouno Duerta during Italdesign's 50th anniversary year,
proving the truth of our motto 'Best is Next'.”

Completely designed, engineered and built at the Moncalieri plant to remain faithful to Italdesign’s
tradition, the Zerouno Duerta shares many features with the coupé version, although the upper part of the
chassis has been redefined and redesigned to guarantee performance, quality and safety standards in the open
version as well.

“The open version was already planned when we first presented the Automobili Speciali brand last
year,” said Filippo Perini, Head of Design at Italdesign. “The positive feedback we have received in
recent months has only strengthened our convictions. The Zerouno Duerta — where ‘duerta’ in Piedmontese
dialect means ‘open’ — shares many features of the coupé, including its supercar-like performance.”

During the development phase of the Zerouno project, Italdesign involved the three-times winner of
the 24 hours of Le Mans and five-times overall winner at Sebring and new member of the Sebring Hall of
Fame and Audi Sport Ambassador, Dindo Capello: “I believe Zerouno perfectly reflects my idea of
supercars,” stated Dindo Capello, “fast, performing, safe that can also be driven on the roads every day. It’s
a real car, not just an object you keep displayed on a pedestal. I can say I really enjoyed driving it during the
development”.

Carbon fibre for a high-performance chassis
As in the case of the Zerouno coupé, lightness and aerodynamics are the core elements of this new
model’s design. Hence, the choice to use carbon fibre for the entire bodywork, accompanied by a generous
use of this material in the vehicle’s interior as well. State-of-the-art fibre-layering technology combines with
the skills of the craftsmen during the finishing stages to achieve a light weight, despite the car measuring 4,847
mm in length, 1,970 mm in width and 1,204 mm in height.

The modifications made to the chassis to allow the roof — also made of carbon fibre — to be
removed have not compromised performance: the powerful naturally aspirated 5.2-litre V10 engine
allows the car to attain a top speed of over 320 km/h.

The team of designers has worked with a view to keeping all the characteristics of the Zerouno
coupé: the style is consistent with the coupé version, with the same aggressive touches dictated by
aerodynamics; the bonnet retains the Y Duct system to optimise downforce and airflow while in motion.
The upper and rear parts of the car's body have been completely redesigned to permit the roof to be
removed without compromising performance and comfort when the vehicle is being driven topless.

"From an engineering standpoint," — continued Antonio Casu, Italdesign’s CTO, "the challenge we faced
was designing a new chassis: we reinforced the structure to compensate — in terms of rigidity — for the
absence of the B and C pillars, typical of a topless car, to ensure a performance comparable to that of the
Zerouno coupé."

The designers and engineers completely redesigned the rear part of the cockpit and the engine
bonnet, adding two roll-bars for the driver and passenger to ensure their safety in the event of a roll-over.
Compared to the coupé version, the Duerta’s engine bonnet features a lowered central portion located
between the two rear shoulders.

The roof can be removed manually, but the Zerouno Duerta also comes with an emergency soft top
to be used in the event of inclement weather during a trip.

A unique feature of the Zerouno project is the option for clients to personalise both the exterior
and interior of their vehicles. The five lucky owners of the Zerouno Duerta will also have this option.

"The experience we have gained over the past twelve months with the five coupés," — explained Massimo
Bovi, Head of the Pre-Series Center, "will continue to serve us well in this second phase of the project. It
might be said that what we built were not five cars in a single series, but rather we built five times a unique
car: the high level of personalisation and the ability to change a vast array of details in the car's interior and
exterior posed a constant challenge. Thanks to the professionalism of our team, this experience will now also
help us to best handle requests for the Duerta."

Automobili Speciali Zerouno is a project that has garnered international success. "The clients who
purchased the five Zerouno coupés come from all over the world, proof that the language of design and the
expert craftsmanship know no borders," — stated Massimo Martinotti, Head of Business Development.
"The first expressions of interest that we have received for the Duerta indicate that this remains the case. In
the near future, we are already offering this new service — the production of ‘few-off’ series — to car
manufacturers."

Dedicated Pirelli P Zero tyres
Not only was the Zerouno’s front design inspired by the single-seater racing cars: the tyres too have a direct
motorsport link. Italdesign has chosen Formula 1’s exclusive tyre supplier, Pirelli, to equip also its second
Automobili Speciali model. The engineers developed a dedicated version of the high-performing Pirelli tyres,
the P Zero, in 245/30 R20 for the front and 305/30 R20 for the back.