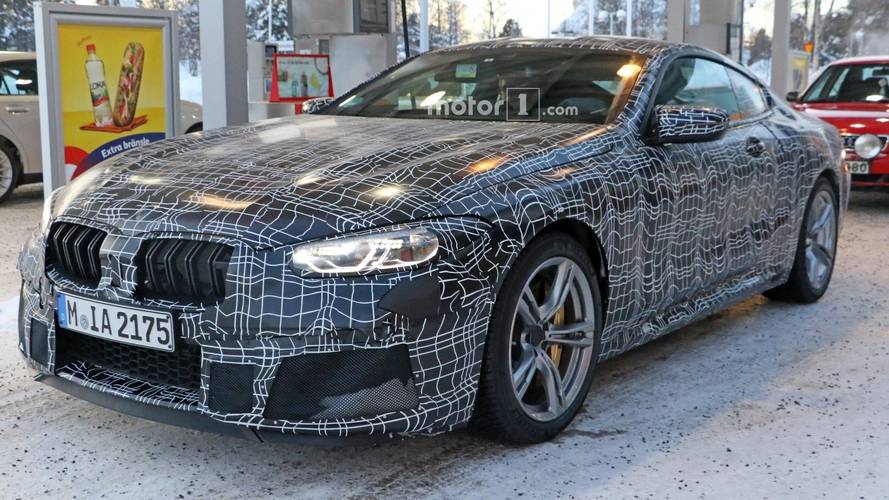 While we’re patiently waiting to see the 8 Series / M8 Gran Coupe in conceptual form at the Geneva Motor Show in Switzerland, BMW was seen the other day testing the hotly anticipated M8 Coupe many miles away in Sweden. The production version has already been confirmed to hit the streets later in 2018, some 28 years since the M8 prototype (E31) that unfortunately never made it to the assembly line.

Getting back to the car at hand, it had the full production body still covered in the annoying camouflage from front to rear, with that sexy derrière carrying an extra layer of disguise affixed to the body using tiny black rivets. It’s a sign BMW doesn’t want us to see the actual back of the car just yet, but even so we can catch a glimpse of the sleek taillights likely employing OLED tech. The quad exhaust system might be the final setup, though it seems to be lacking the finishers.

The test vehicle was riding on 19-inch wheels shod in Michelin 265/40 R19 tires and seemed to have carbon ceramic brakes judging by the yellow calipers. With a biturbo 4.4-liter V8 engine producing at least 600 horsepower, the M8 will certainly need all the extra stopping power it can get.

An exact number regarding the output is not available at this point, but seeing as how the M5 with the Competition Package is expected to have 625 hp, the M8 should boast at least that. Perhaps it will have even more to justify its position at the top of the M food chain and a steep price tag to reflect that.

Three different M8 versions are in the pipeline taking into account that besides the regular Coupe and the more practical Gran Coupe, BMW is also plotting a Convertible catering people in the market for open-top thrills. There's actually a fourth derivative if we take into account the track-only M8 GTE powered by the company's most efficient racing engine ever made.