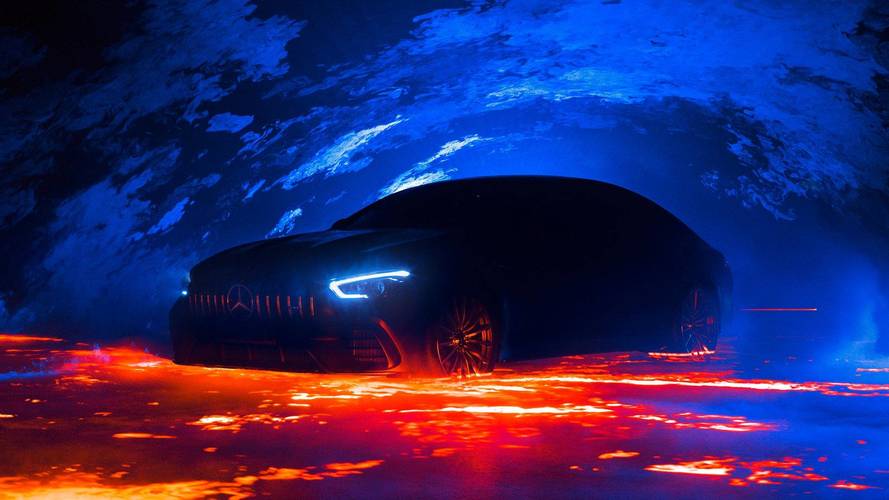 A full debut is just days away.

Mercedes-Benz's interminable teaser campaign for the AMG GT Coupe continues with a pair of new images. Rather than shooting the car in a dark room like in many pre-reveal photos, Mercedes surrounds the sedan in brilliant colors without actually showing the upcoming vehicle.

The shots provide glimpses of a few design details, though. Up front, there's AMG's Panamericana grille with vertical slats and a prominent star in the center. A fascia with broad openings is visible, too, including gills at the corners that would likely channel air to cool the brakes behind the multi-spoke wheels. The headlights feature LEDs that outline most of the shape except for the bottom portion.

The photo from the rear provides an even better look at AMG's upcoming performance sedan. Widened fenders and a vent behind the front wheels give the four-door an aggressive appearance. Broad taillights appear to reach nearly the entire way across the rear end. There's a big diffuser and angular exhaust outlets, too.

If you're tired of Mercedes teasing the GT Coupe, the good news is that it debuts very soon at the Geneva Motor Show. A multitude of photos provide a great view of how the vehicle looks like on the outside and provide a good glimpse at the interior. There are fewer concrete details about the powertrain, though. AMG's 4.0-liter biturbo V8 is likely under the hood, likely producing over 600 horsepower (447 kilowatts). Later, the company reportedly intends to offer a version of this mill with hybrid assistance to boost the output to around 800 hp (597 kW).

The most confusing thing about this car continues to be its name. Mercedes refuses to confirm the production model's moniker, but all of its official communication refers to vehicle as the GT Coupe. However, the existing AMG GT is already a two-door, so calling this four-door a coupe is befuddling.