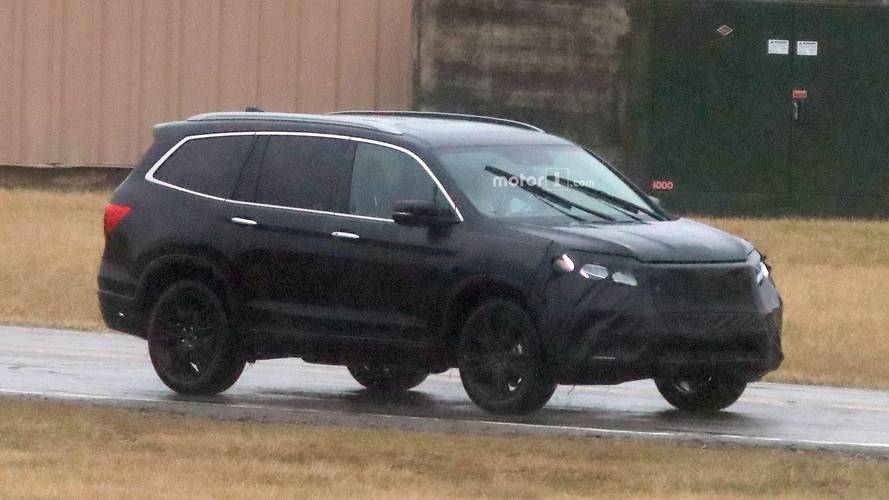 The updated SUV's styling cues should be reminiscent of the Accord sedan.

The third-gen Honda Pilot ushered in a new era for the now 15-year-old SUV. A brand-new platform, a sleek new design, and plenty of added tech transformed the formerly rugged CUV into something more upmarket. Now, after just two years on sale, Honda is already prepping a refreshed version of its successful three-row.

New spy photos show the updated Pilot testing, hiding its new face underneath all that camouflage. The images, admittedly, don’t give us much to work with in terms of styling, but we know that the grille, at minimum, will be updated, and possibly the taillights, which are also partially covered up. The Pilot will reportedly borrow most of its new styling cues from the Accord. In the cabin, don’t expect many changes. The Pilot already comes with an eight-inch touchscreen with Apple CarPlay and Android Auto compatibility.

Most of the body goes unchanged, as one would expect with a mid-cycle refresh – but under the hood we should see some changes. The Pilot is expected to add a hybrid or plug-in option for 2019 – as will the Odyssey minivan – borrowing its two-motor powertrain from the Accord Hybrid. The standard version should still feature with the same 3.5-liter V6 found on the current model.

In the current Pilot, the 3.5-liter V6 with Variable Cylinder Management produces 280 horsepower (208 kilowatts) and 262 pound-feet (355 Newton-meters) of torque. Most trims come paired to a standard six-speed automatic, but the range-topping Touring and Elite models use a nine-speed gearbox instead.

The new Pilot will make its debut later in the year, and will go on sale as a 2019 model year. Rumor has it that the SUV could be joined by a smaller sub-Pilot offering, potentially reviving the Passport name, but that remains to be seen.