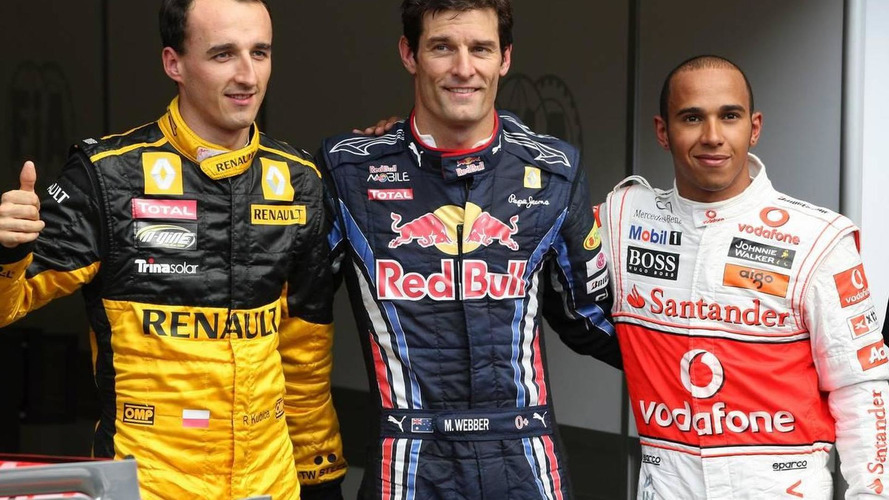 Webber not worried about running out of tyres

Mark Webber on Saturday said he is not worried about running out of useable tyres in Belgium.

Earlier at Spa-Francorchamps, where wet and changeable weather has featured regularly so far this weekend, Bridgestone admitted it is worried about drivers running out of rain tyres.

Each car is restricted to 3 sets of extreme wet compounds and 4 intermediates for the entire weekend, and so far those tyres have only been lasting a few laps before graining and degrading.

But after securing pole on Saturday, championship leader Webber played down the situation.

"I think we should be fine for tomorrow's grand prix," he said. "Maybe they will have to make a few more for next week but they should be able to do that."

"If qualifying had been wet and tomorrow it's raining then we might be in trouble but it should be ok," said the Pole.

Other news briefs from Spa

Aug.28 (GMM) Fernando Alonso on Saturday said he is not worried after qualifying just tenth for the Belgian GP.

"This was the least important qualifying of the year because of the weather. Anything can happen so our goal is still the podium and victory," the Ferrari driver told Spanish media.

Timo Glock has lost his impressive 17th on the Belgian GP grid with a five-place penalty for impeding HRT's Sakon Yamamoto in qualifying.

"Can anyone explain why Timo gets a penalty for holding up Yamamoto but Trulli gets nothing for hitting Lucas (di Grassi) under yellows?!" said the Virgin team on Twitter.

Lotus' Jarno Trulli was, however, fined EUR 4,400 for pitlane speeding.

There are few smiles in the Mercedes camp this weekend.

Michael Schumacher's ten-place grid penalty for his Rubens Barrichello duel in Hungary drops him to 21st, and teammate Nico Rosberg is demoted to 17th due to an unscheduled gearbox change.

Neither W01 was fast enough to make the Q3 cut in Spa-Francorchamps qualifying.

"A few of the new parts we have here did not work," Rosberg is quoted by the German media. "I am very much hoping for rain tomorrow."