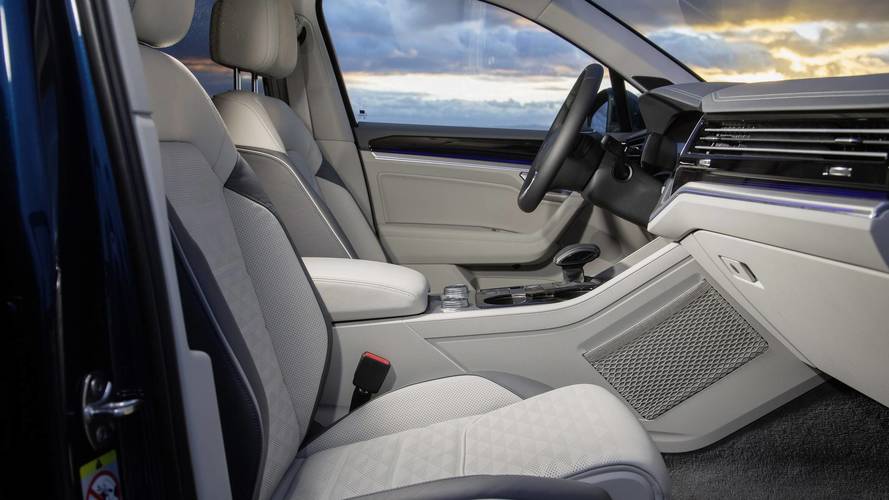 Although you can't quite see it, there's a massive 15-inch touchscreen dominating the center console.

It was only earlier today when Volkswagen released a short teaser video with its all-new Touareg, and now the luxury SUV is making headlines once again. This time around, we’re actually dealing with something more substantial as the folks from Wolfsburg have been kind enough to release a couple of images showing a good chunk of the revamped cabin.

The continuous air vent design might make you think the Touareg’s cabin will have many things in common with the interior you get in the European Passat or the Arteon, but nothing could be further from the truth. You see, the all-new Touareg has something called an “Innovision Cockpit,” which combines a large 12-inch digital instrument cluster with an even bigger 15-inch display for the infotainment system. Automotive News has heard from a source close to the company that the new virtual cockpit might trickle down to the Arteon, but nothing is official just yet.

The reason why you can’t actually see the touchscreen in the adjacent teaser image has to do with the fact it’s heavily angled towards the driver. VW promises a sleek look as the two screens have been integrated into the instrument panel in such a way as to provide a one-piece configuration. While the swanky dual-screen layout will take care of the cabin’s high-tech component, real aluminum and wood accents will be responsible for providing the interior with a luxurious feel. After all, with the demise of the Phaeton (still available in China, though), the new Touareg will effectively become VW’s flagship model in Europe, but not in the U.S. because unfortunately it won’t be sold stateside anymore.

Traditionalists will be happy to hear that although most of the functions have been built into the touchscreen, the volume control is still an actual knob: “We fought vehemently for that," according to 2019 Touareg head developer Andreas Reckewerth.

VW has also dropped several images with partially camouflaged prototypes, but these aren’t exactly hot stuff considering the luxury SUV was spotted sans disguise a while ago.

Switching to the MLB Evo platform means the 2019 Touareg will have a lot of things in common with SUVs playing in much bigger leagues, starting with the Audi Q7, continuing with the Porsche Cayenne and Bentley Bentayga, and ending with the mighty Lamborghini Urus. Rear-wheel steering will be available to make the vehicle more agile, though it will still very much be a big and heavy SUV at the end of the day.

But despite its sheer size, the luxury SUV will have roughly the same turning radius as the much smaller Golf, which is an impressive feat no doubt. For utmost comfort, an optional air suspension will be offered and it’s going to boast the SQ7’s electromechanical active roll stabilization. Another interesting feature is an upgraded night vision system projecting a thermal imagining view of the road – a first for a VW production model.

The revamped VW Touareg will premiere on March 23 in Beijing, but the market launch is slated to take place in 17 weeks from now, so towards the end of June / early July. Production will take place at the same plant in Bratislava, Slovakia where it will continue to share the assembly line with the Q7 and Cayenne.