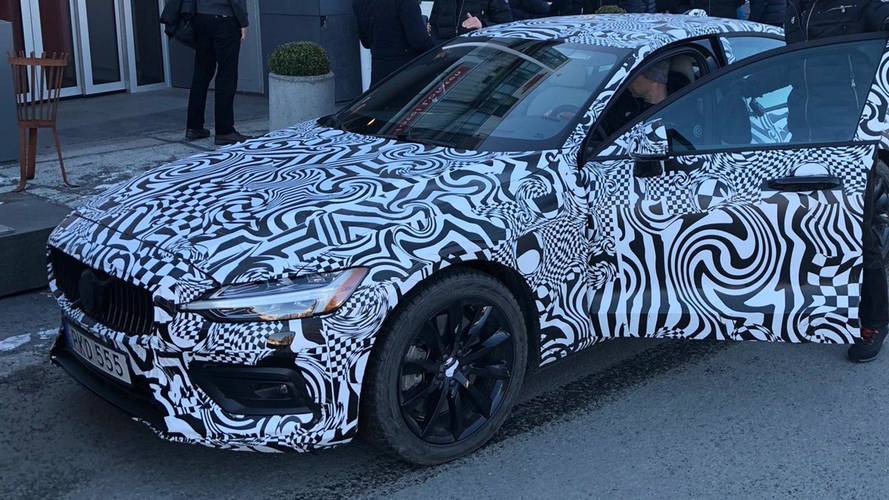 The front end looks a whole lot like the new V60.

Just days after unveiling the new V60 wagon, Volvo is now providing a glimpse of its S60 sedan sibling. Even under heavy camouflage, it's clearly quite a handsome four-door.

The photo really only provides a good glimpse at the sedan's front end. It takes significant cues from the new V60, including wide wraparound headlights with the brand's trademark Thor's Hammer LEDs. They connect to a broad grille. The fascia is also similar by incorporating angular cross members and foglights in the niches. This model appears to have a more prominent chin spoiler than the wagon, which gives the four-door a more aggressive face. The black wheels with finned spokes look mean, too.

Volvo puts an emphasis on sharing engines and technology among its vehicles, particularly the ones in the same series. This means that the S60 would have the same powertrains as the V60, including two plug-in hybrid gasoline mills, and the top T8 variant would offer an impressive 385 horsepower (287 kilowatts). These will the last internal combustion engines from the company before a switch completely to EVs.

Inside, the driver gets a 9-inch infotainment display. Buyers can also get assistance tech like automatic emergency braking and semi-autonomous driving systems.

The new S60 will debut this summer at an event in South Carolina. The odd location for a major model debut is due to Volvo building a new factory in the state in Berkeley County. The automaker began construction on the $500 million plant in 2015. At the time, the firm confirmed plans to build the S60 and a second, unnamed vehicle there. The company designed the site to build up to 100,000 vehicles a year with the intention of delivering them to the United States and export to foreign markets.