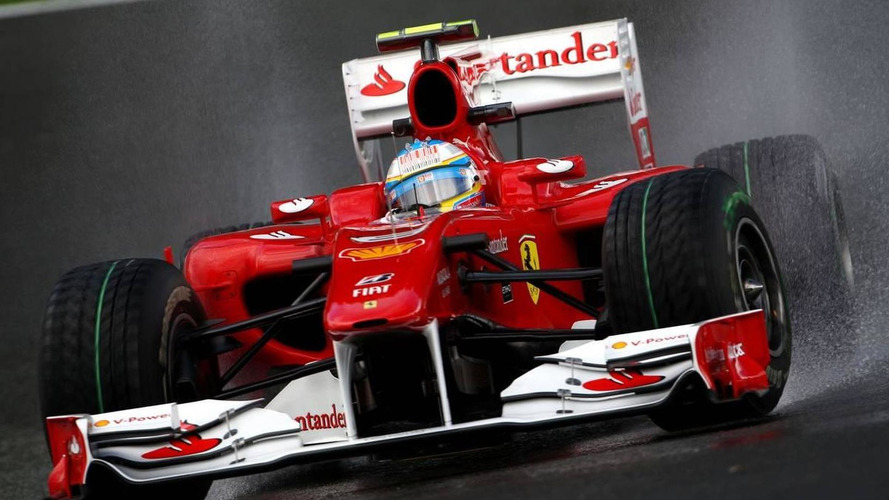 Fernando Alonso was fastest in both of Friday's practice sessions at Spa-Francorchamps.

Fernando Alonso was fastest in both of Friday's practice sessions at Spa-Francorchamps.

But after emerging from his Red Bull with the 18th quickest time in the afternoon, championship leader Mark Webber warned observers not to read too much into the first day's results.

Indeed, the track was wet for most of the running, and when the sun was shining at the end, the red flags were waving due to spectators climbing a perimeter fence.

But on a late dash on dry tyres, Alonso followed up his wet morning time with the best time of the day in the afternoon, causing HRT driver Karun Chandhok to describe Ferrari's pace as "ominious" on BBC radio.

The Italian team has another blown diffuser development in Belgium this weekend.

"I think we have improved the car over the last three grands prix, which means we now have a very competitive package," said Spaniard Alonso.

Sebastian Vettel's sixth place was the fastest Red Bull time on Friday afternoon, but Alonso said on Thursday that the Austrian-owned team is still favourite.

"I don't see how they would lose a one second advantage since Hungary, but this race and the next one at Monza requires special low downforce and it will be interesting to see who makes the best job of running this configuration," he said.