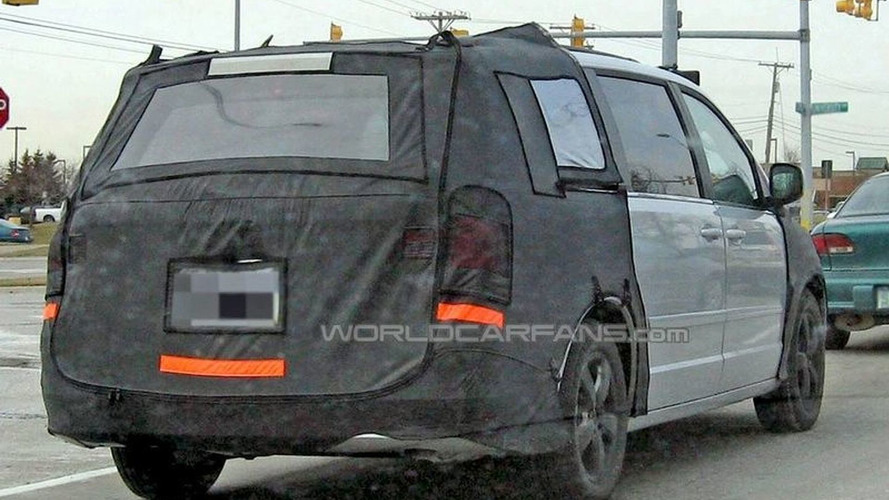 Pictures confirm the Routan will be a rebadged Chrysler Town & Country/Dodge Grand Caravan; the new minivan will be presented at the Chicago Auto Show

When Volkswagen officially stated it would have a new minivan for the North American market, in association with Chrysler LLC, it was pretty obvious the new VW Routan would use the same architecture in which Chrysler Town & Country and the Dodge Grand Caravan are based. Now we confirm that with the first spy photos of the vehicle, obtained few days before the official presentation, scheduled for February 6, 2008, when the Chicago Auto Show will open its doors to the press.

The pictured minivan may seem to be a regular Town & Country, but there would be no reason to disguise a production vehicle. Besides, pay attention to the taillights. When they are turned on, it is possible to see they are round, just like most of the modern VW cars? In the picture in which the back of the minivan is more visible, the camouflage leaves an uncovered space for the rest of the taillights to appear. And they invade part of the backdoor, just like the taillights of the Sharanâ€¦ By the way, since the Touran is aimed for the USA, the Sharan will continue to be sold in Europe. At least meanwhile (you know, plans can always change). Photographers also stated that the rear-side windows are very different from the ones used in Chrysler and Dodge minivans.

Unless Volkswagen decides to use its own engines, the Routan will have three option of V6: a 3.3 delivering 175 hp, a 3.8 that generates 197 hp and the top of the line 4.0, that counts on 253 hp to move the new VW minivan ahead. Customers interested in the Routan, which will be produced in Canada, will have to wait until September to buy one. Volkswagen has already rebadged other carmaker products, such as the VW Taro, based on the Toyota Hilux, and the VW Apollo in Brazil, based on the Ford Verona. In both cases, results were not as good as expected.