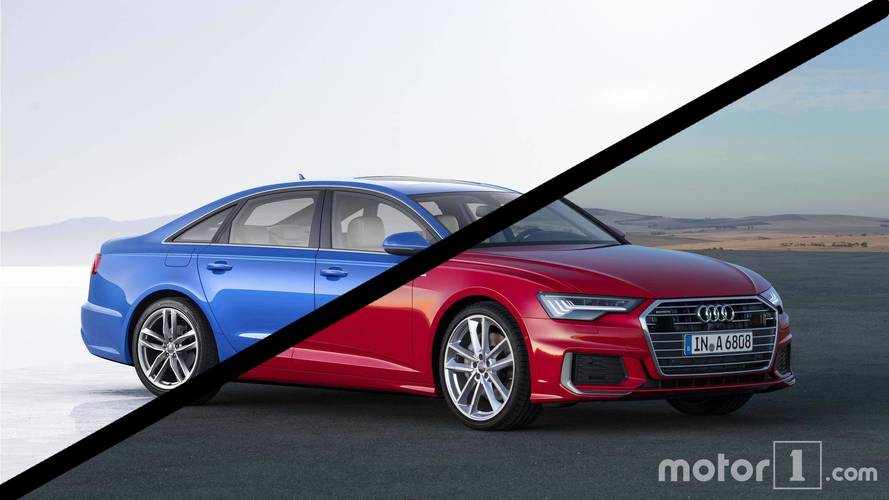 The tweaks for the new A6 aren't immediately obvious, but they become far more obvious when you look closer.

The current trend from German automakers is to evolve their vehicles' design for each new generation rather than overhauling the look of the latest products. Audi's recent redesign for the A6 perfectly highlights this styling ethos. At first glance, the changes seem rather minor, but you can get a much better idea at the tweaks by comparing the old and new version of the sedan side-by-side.

In each comparison tool below, the new A6 is always on the left, and the previous version is on the right.

The 2019 Audi A6's biggest changes are most evident at the front end. The new grille is wider and has sharper edges outlining it. Audi's designers also bring the headlights closer to the grille and give them pointy edges. The lower fascia also has a more complicated appearance by making the grille seem to float about it. The result of these changes is that the A6 appears meaner and arguably more futuristic due to the more angular parts, in addition to the sharper creases in the hood.

After the significant changes to the front end, it's somewhat surprising to see how similar the new A6 looks to the previous-gen sedan from the three-quarters perspective. Among the fairly minor tweaks, the designers incorporate more prominent sculpting along the doors. In addition, there are sharper creases along the model's shoulders.

The changes from the three-quarters perspective are more evident when viewing the A6's profile. The tweaks give the latest generation a more muscular appearance than the previous model.

Much like the front, Audi's designers have noticeable changes for the rear end of the new A6. The taillights now have a larger area at the corners of the vehicle, which gives them a less homogenous appearance. There's also a sawtooth-pattern of LEDs than lend a visual flourish to the sedan's tail. A metallic strip running between the taillights also accentuates the model's width.

The lower fascia has a much more interesting look, too. New cuts at the corners add an aggressive touch. The tailpipes follow the general theme of this generation of A6 by gaining sharper edges, and the outlets appear larger, too.

Inside, the A6 features a cutting edge cockpit that looks much better than the older model. Audi incorporates its Virtual Cockpit digital instrument panel, and the steering wheel appears slightly larger, which would give a driver a better view of the screen. Rather than the an infotainment screen that appears like an afterthought on top of the dashboard, the latest generation has a cleaner layout with HVAC vents on top and then the display below them. Further down, there's another digital screen for handling the ventilation controls. A stumpy gearshift takes up much less room in the cabin.

The new interior's big weakness is that it's a bit busy. In addition to the upholstery, there's a mix of metallic and gloss black finishes for the trim. Plus, there's wood available on the center console and a gray headliner. The color choices just don't look very cohesive.

The new A6 will be on sale in Germany in June, and it'll then trickle out to other markets.