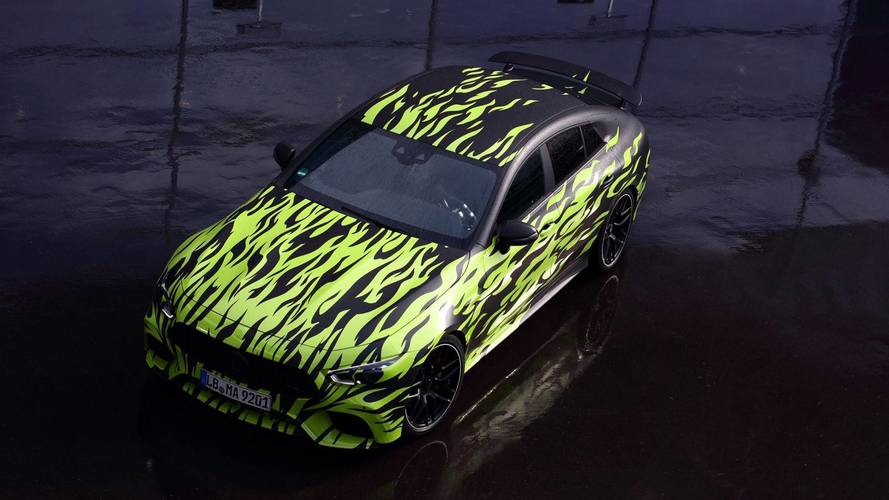 Coupe or sedan, two doors or four, it's still going to be fast.

It’s been a long time coming, but the latest addition to the hardcore Mercedes-AMG GT line is nearly upon us. We’ve seen countless spy photos of the new car, a few spy videos, and then there’s the latest teaser from Mercedes-Benz showing perhaps the most bonkers “camo wrap” we’ve ever seen on a test car. We’re almost positive this car will have the 4.0-liter biturbo V8 with obscene horsepower, followed by a hybrid version with even more obscene power.

What we don’t yet know, however, is what the heck this car will actually be called.

Throughout most of the AMG's testing phase we (along with the rest of the world) referred to it as the Mercedes-AMG GT sedan. Then a week or so ago Mercedes started calling it a coupe, which isn’t confusing at all since there’s already an AMG GT Coupe. Now, MBpassionblog posted a rumor saying the new car will simply be called the AMG GT 4-door Coupe, which is generally what we’ve taken to calling it.

Yes, we get that automakers like using the coupe moniker for any vehicle these days with a swooping roofline. Back in the day, anything with a central B-pillar was a sedan, regardless of the doors or shape of the roof. Coupes on the other hand featured a B-pillar further back, which generally led to the sweeping, arcing roofline commonly associated with the name. It also meant they had two doors since there was no B-piller for a second set of doors to hinge from.

The forthcoming AMG GT four-door does have the central B-pillar, but it also has a swooping roofline so there’s certainly something of an identity crisis here. Unfortunately, sedan must be a naughty word at Mercedes that fills buyers with uninspired visions of taking kids to birthday parties. Despite the new AMG GT technically fitting this definition of a sedan, it seems the car will be branded a coupe with four-doors. Because that sounds so much better.

We reached out to Mercedes for any sort of confirmation on this whole naming situation, hoping to get some clarification. The official response was that the name hasn’t been announced and it will be revealed with the car at the Geneva Motor Show.

Until then, enjoy these photos of a car from Mercedes-AMG that’s technically a sedan but could be called a coupe with four doors.