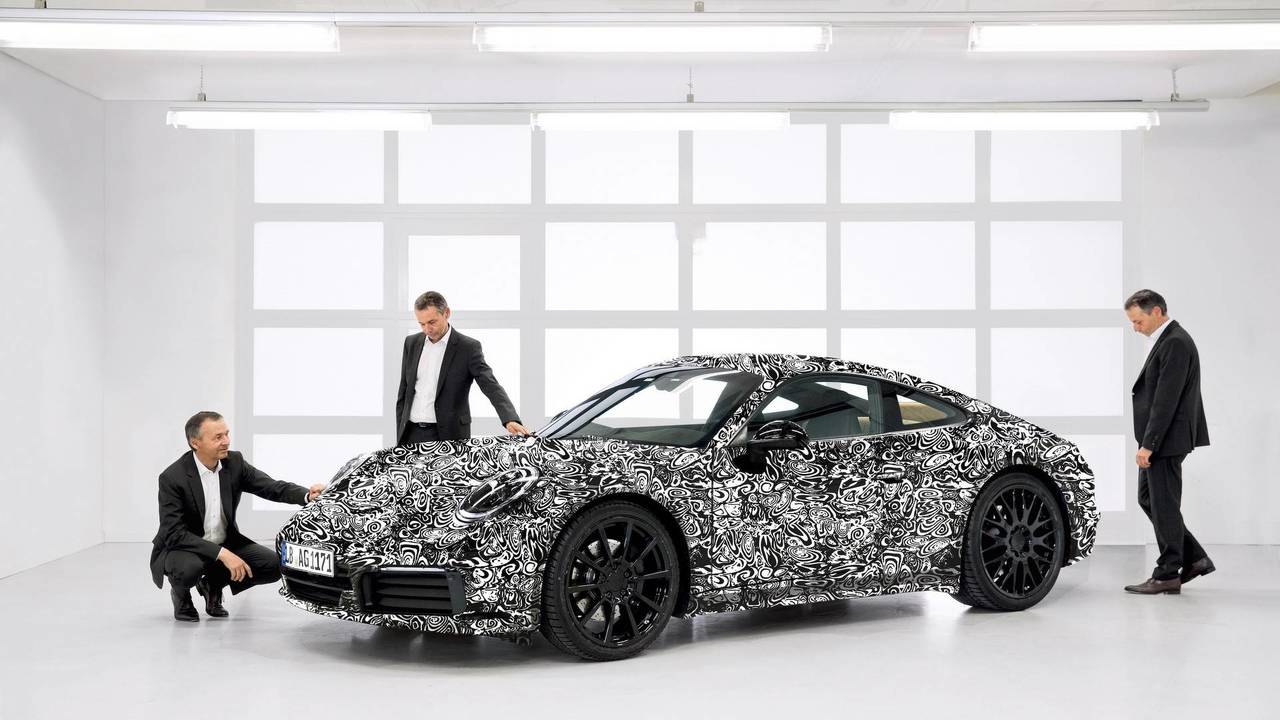 The interior isn't being shown, but we have a new spy photo of an almost uncovered cabin.

It was only on Tuesday when Porsche unveiled the last hurrah for the 991.2-gen 911, the facelifted GT3 RS, and now the company is getting ready to move on and unveil the 992. To ease the wait until the full reveal scheduled for later this year, three images depicting a near-production prototype covered from front to back in camouflage have been released. With the risk of stating the obvious, the next Nine Eleven will adopt an evolutionary design like all of the models before it.

Porsche is being coy on details for the time being, but 911 model line director August Achleitner has revealed that while the 992 won’t be an electric sports car, he’s been having a change of heart lately: “it could be an option somewhere down the line.” Reading between the lines, he was actually referring to a hybrid version as a fully electric has been ruled out already for at least 10 years from now. The hybrid 911 is rumored to be of the plug-in type and will allegedly arrive in 2023 or 2023 with a yet-to-be-confirmed 485 horsepower and 561 pound-feet (761 Newton-meters) of torque.

Billed by Achleitner as being “the heart of the company,” the 911 will “always have a steering wheel” and if autonomous cars will take over the world sooner than expected, he promises the 911 will be among the last ones to jump on the driverless bandwagon. He went on to mention that while the 992 won’t go through any radical changes, the subtle evolution prepared for the next generation will make it “the best 911 of all time.”

According to the latest intel, the new 911 will be topped upon launch by a Turbo S version with as much as 630 horsepower (up from today’s 572 hp) coming from an upgraded 3.8-liter flat-six and using some hardware from the GT2 RS. Slotting right underneath it will be the non-S Turbo with a rumored 592 hp, which would represent a major boost (+61 hp) over the outgoing model.

The 992 will ride on an evolution of the MMB platform bringing some weight savings as a result of using more aluminum and high-strength steel. Spy shots have shown the next generation will be a tad wider than the outgoing model, while length is expected to remain virtually the same. Better packaging brought by the revised platform could free up more space inside the cabin, but let’s face it, people aren’t buying 911s for the legroom. Porsche isn't quite ready to show us the interior, but this new spy image (below) gives us a better understanding of what to expect from the final car.

It is believed the first versions of the 992, the Carrera 2S and 4S coupes, will be revealed to the public in October at the Paris Motor Show. Like with its predecessors, a multitude of derivatives will follow, including a new Targa.

The 911 is not simply a sports car. It is the base from which the entire company operates. It was then. It is now. And it will be in the future.

There’s an oft-repeated anecdote from 1990: the setting is a technical seminar in Berlin for engineers in the automotive industry. During a break, two participants are talking about the Porsche 911. One of them, a leading engineer for a major carmaker from southern Germany, says: “If I had to improve that car, I wouldn’t have the foggiest idea. I think it would be incredibly difficult.” The other, a leading engineer at Porsche, regards his counterpart with incredulity—and says nothing. It still elicits a chuckle from August Achleitner today when he thinks of his befuddlement back then in Berlin. Further developing the Porsche 911 has been his job for almost twenty years. Achleitner is the director of the 911 model line and is thus something like the keeper of the Porsche grail. “The heart of the company,” he calls the 911. If one were to strip down everything that bears a Porsche logo, that exemplifies and drives the company, to reveal the core of the brand, it would look like a 911. With its unmistakable flyline—the typical roof line—the 911’s style-defining basic form retains its freshness and trailblazing spirit even today.

It’s all about that sporty note

The next 911, generation 992, will carry on that proud tradition. “We know where we’re from and where we want to go,” says Achleitner. “The decisive factor is that the 911 generates a driving feeling that no other car can impart.” That’s not meant in an arrogant way, it’s really just the nature of things: the specific seat position, the flat-six engine in the rear, its inimitable sound, the astonishing amount of space, the perfect feedback from the brakes, steering, and pedal system together with the striking suspension, the powerfully dynamic but always easily controllable burst of power, and the one-of-a-kind design that ties it all together, making this car the epitome of what it has meant to be a sports car—for fifty-five years.

Achleitner: “We know where we’re from and where we want to go.”

The riveting question is how the 911 needs to develop in the future to continue to define the brand as the gravitational core of Porsche. Automotive industry megatrends—including digitalization, electrification, and connectivity—will play a role, as well as the question of how these trends should be evaluated. “With each innovation, the decisive factor for me is whether it suits the character of the 911,” explains Achleitner. “We don’t necessarily have to be the first in this regard with the 911. What’s crucial, rather, is that every innovation be offered in a typical Porsche manifestation.” Here, it’s the designers, above all, who are called on to work their magic, according to the 911 chief. The 996, for example, was the first to feature a navigation system. When Achleitner looks at this model today, he still finds it beautiful and elegant, although he has to admit that some elements strike him as a bit outdated now. It pains him, “because the car suffers for it.” It’s therefore important, he feels, to design digital interfaces between people and machines that are as timeless as possible. “Anything but contrived,” is Achleitner’s creed. He’s convinced: “Even where the public might be expecting a bigger ‘wow factor,’ in the long run a certain aesthetic reserve pays dividends.”

The joy of driving always has to be in the foreground

But the visual packaging of new technologies is just one aspect. The other aspects involve the capabilities that they enable. “Even when it comes to the individual assistance systems, they have to fit with the 911,” underscores Achleitner. After all, no one buys a sports car because it offers adaptive cruise control or a lane-keeping assist function. “Those are convenient and useful things. But the customer has to make the choice to use them and, above all, be able to switch them off when they’re not desired.”

One thing is especially important to him: the joy of driving always has to be in the foreground. “That’s why a 911 will always have a steering wheel.” And if autonomously driving cars break through more quickly than expected? “Then the 911 will be one of the last cars to drive autonomously.”

“The decisive factor is that the 911 generates a driving feeling that no other car can impart.”

In all discussions of autonomous driving, Achleitner hews to his line: Porsche and the 911 are a bastion of stability amid the hype, which heretofore has primarily consisted of mere announcements and statements. The 911 will not change radically—and yet it does evolve. It was 1997 when the era of air-cooled engines came to an end and the age of water-cooled flat-six engines began. It was 2015 when the last naturally aspirated engine in the rear of the Carrera was completely replaced by a turbo engine. “Some fans rushed the barricades; it was all gloom and doom for many,” recalls Achleitner. “And then the same thing happened as always: nothing.” The new models have always received even more rave reviews than their predecessors. “That encourages us to think about fundamental innovations in the future as well.”

Electric drive technology? Why not?

Electric drive technology is a good example. “Two years ago I’d have said no way. Today I wouldn’t categorically rule it out,” concedes the head of the model line. Just to preclude any misunderstandings: the Porsche 911, Type 992 is not an electric sports car. But it could be an option somewhere down the line. Achleitner describes his ongoing change of heart: “I drove the prototype of our coming electric sports car, the Mission E, and it was a very compelling experience. And the performance of the Porsche LMP race cars with hybrid drive systems is quite simply sensational.” Achleitner is certain that no car with a combustion engine alone could beat them around the corner. Although he admittedly clings to the flat-six engine, he can, nowadays, imagine an electric motor in the 911. So there will be a next step in terms of drive technology—if it fits Porsche and the specific character of the 911.

The secret of the Porsche 911 could perhaps be described as follows: it’s the sportiest and most dynamic car in the company’s line-up, but also its bastion of stability. A point of orientation for which Achleitner has found a very simple development principle—which may have something to do with that short talk back in Berlin in 1990. In contrast to his counterpart that day, he does have an idea: “The new 911, too, will be the best 911 of all time.”