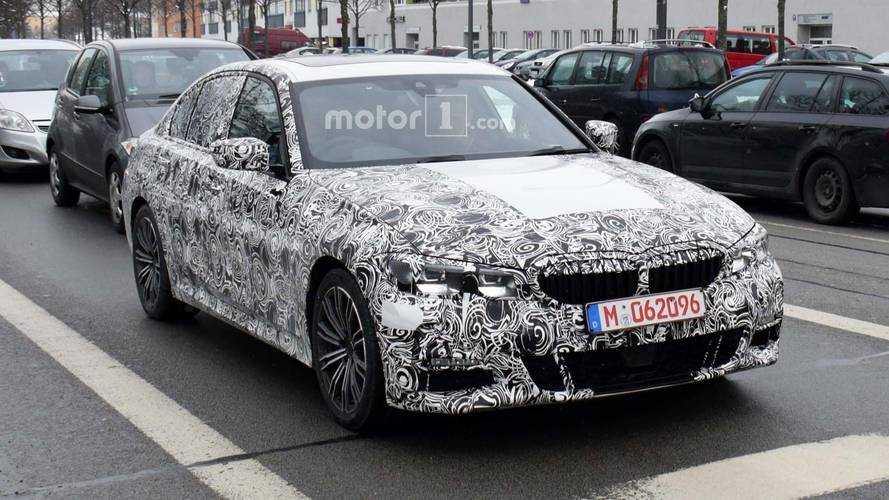 There's a standard model in the photo collage, too.

Anytime BMW tinkers with its much-loved 3 Series there’s a bit of tension in the air. This time around the perennial German sedan’s new look appears to be rather conservative in nature, something these latest spy shots further confirm. Caught testing on city streets, these photos actually show two different 3 Series prototypes with some minor differences, but the thin camo tells us current 3 Series fans won’t be disappointed with the styling of the new car.

Looking close, we see these photos do reveal some new details we haven’t seen before. The production headlights are a bit easier to see, as are the lower LED driving lamp on the front fascia. Some of the camo wrap has also disappeared on the fascia of both cars, giving us our best look yet of the lower vents. Recent renders from some of our spy photographers pointed to a single intake spanning the entire width of the fascia, but these photos suggest it will be broken into segments.

There’s also a strong possibility that we could be looking at a standard and M-Sport model in the collage of photos. The car with the number plate ending in 096 definitely seems to have a more aggressive look up front, if you will. It also appears to have wider tires, and though both cars sport dual exhaust outlets at the rear, a close look at 096’s rear fascia reveals vents on the side that don’t show up on the other prototype.

Even though the overall 3 Series look isn’t going to change drastically, we do expect the final product to more closely resemble the larger 5 Series. Underneath, however, the next-gen 3 sedan will have all-new bones with the CLAR architecture. That should stretch the wheelbase just a bit, strengthen the unibody, and shave some weight compared to the current model.

We expect to see BMW reveal the next 3 Series later this year at the Paris Motors Show.