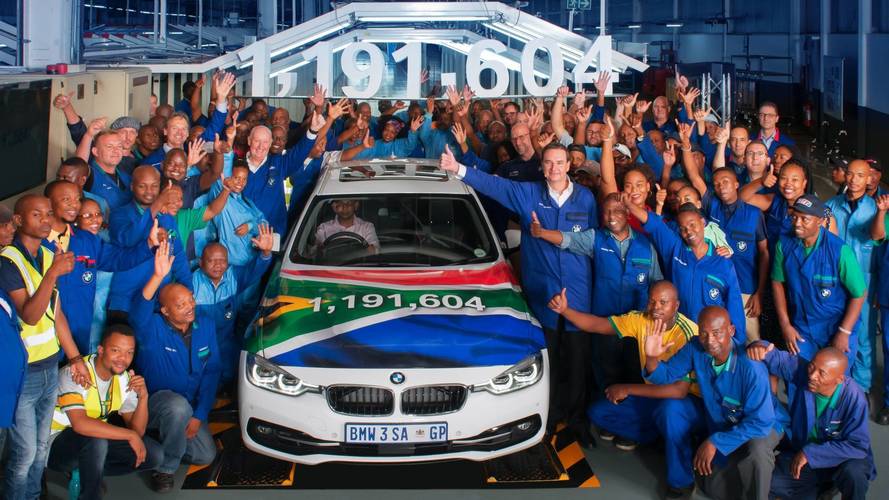 Today is a happy/sad kind of day for BMW South Africa as those working on the assembly line have concluded production of the 3 Series Sedan. 35 years and 1,191,604 cars later, the sporty executive sedan is being discontinued from the Rosslyn factory to make room for the new X3. BMW first announced plans to build the posh crossover in South Africa in November 2015 by investing 6 billion ZAR (about $420 million back then, $513M now) and will kick off production in the next few months. A further $13.7M were invested in October 2017 to speed up the production process.

To understand the importance of BMW’s Rosslyn assembly plant, a quarter of the current-generation 3 Series Sedans have been built in South Africa, so bidding adieu to the model is a big deal. Throughout the years, each generation built there received its own nickname, with the third-gen model (E36) sold between 1990 and 2000 being known internally as the “Dolphin” thanks to its “elegant contours.” BMW also put together a couple of special editions of the 3 Series Sedan, such as the 7 Series-powered 333i E30 and the 325iS / 325iS Evolution HP (also E30) with an Alpina-optimized engine.

Ending assembly of the 3 Series Sedan at the Rosslyn factory doesn’t mean BMW has plans to reduce the model’s production output as the car will be manufactured at the firm’s new factory in San Luis Potosí, Mexico. With the next-generation G20 right around the corner, it means the all-new CLAR-based 3 Series will be the one to come to life at BMW Group’s new plant. It’s set to open in 2019 following an investment of around $1 billion and will have an annual production capacity of up to 150,000 cars.

“We look back with great pride over an extraordinary career path of the production at Plant Rosslyn. Over the years, the development of our production and export programme has been the catalyst for our sustainable growth and contribution to the South African economy,” says Tim Abbott, Chief Executive Officer (CEO) of BMW Group South Africa.

In the next few months, Plant Rosslyn will launch the production of the BMW X3. In the future, the BMW 3 Series Sedan will also be manufactured at the new BMW Group plant in San Luis Potosí, Mexico.

One of the key milestones of the BMW 3 Series has been the success in founding the segment of the modern sports sedan, establishing itself as the embodiment of driving pleasure in its segment and becoming the world’s top-selling premium car. The enthusiasm for this model series was also shared by the production staff who expressed their passion for these cars by giving them legendary nicknames. Each generation of the BMW 3 Series produced at Plant Rosslyn had its own nickname: the third generation, for instance, was called “Dolphin” for its elegant contours. Limited edition models of the BMW 3 Series, such as the BMW 333i and 325iS, also emerged from the plant.

BMW X3 instead of BMW 3 Series

With the production of the new BMW X3 in the coming months, a new era will begin at Plant Rosslyn. In November 2015, BMW Group South Africa reaffirmed its long term commitment to South Africa by announcing that it will invest a total of R6 billion at Plant Rosslyn. The investment – one of the biggest in the local automotive industry – has enabled Plant Rosslyn to get ready to produce the new BMW X3. In October 2017, an additional R160 million was invested into the Rosslyn manufacturing facility to enhance production line speed.

Stefan Hülsenberg, Director of BMW Plant Rosslyn, explains: “The enhancement has raised the maximum production capacity to 76 000 units, leaving the plant with excellent potential in the future to produce the highest volume ever in its 45-year history. Plans to create a center of production excellence at our plant are well under way with the largest infrastructure upgrade in the history of the facility now completed and staff upskilled in state-of-the-art technologies.”