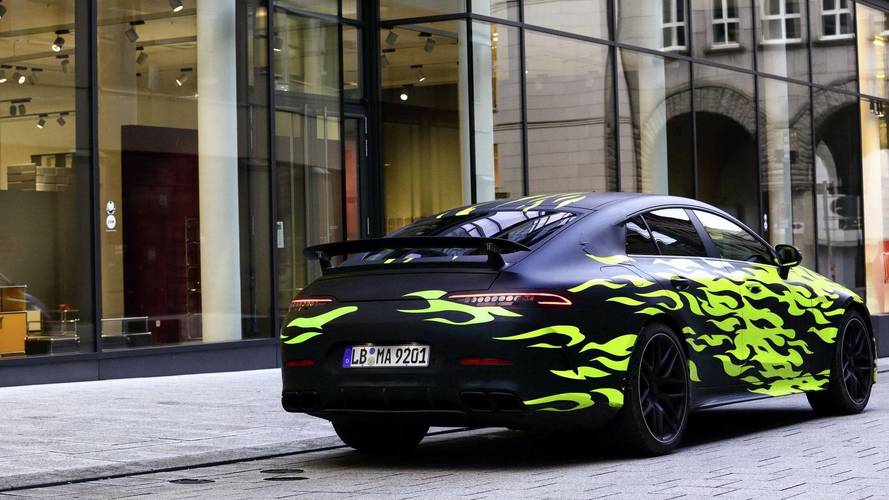 [Update] Our spies have sent us 34 new images (attached at the end) with prototypes of the new Mercedes-AMG model from the most recent test session. Unsurprisingly, these were being benchmarked against the Porsche Panamera, specifically the range-topping Turbo S E-Hybrid.

After spending some time in the wind tunnel, the Mercedes-AMG GT Four-Door Coupe (or whatever the car’s name will be) is out and about sporting new attire. Gone is the typical black and white camouflage as the CLS 63 replacement has gained a matte black body wrap with neon green accents sending out a Need For Speed vibe.

The latest batch of teaser images is also the most revealing as we get to see almost in full the headlight and taillight design as well as more of the car’s aggressive lines. A closer look at the greenhouse shows the tiny fixed glass aft the rear doors remains concealed underneath black tape and up front there’s also some disguise on the big three-pointed star logo adorning the menacing Panamericana grille.

As many spy shots have shown, the new member of the Mercedes-AMG family will look substantially more aggressive than the 2019 CLS, which is certainly a good thing. The Panamera fighter boasts massive air vents up front and a blacked-out quad exhaust at the back where it also proudly carries a prominent spoiler and a diffuser.

Although the folks from Affalterbach keep referring to the new arrival as being a coupe, it’s simply not. At the same time, it’s technically not a sedan either since the car will have a more practical hatchback rear opening like its rival from Stuttgart. Body style aside, we’re patiently waiting for camo/wrap to come off and see the muscular body with its wide hips and chunky side skirts.

The public unveiling will take place on March 6 at the Geneva Motor Show during the first press day, but here’s hoping Mercedes will be kind enough to reveal the car a few days sooner on the World Wide Web. A biturbo 4.0-liter V8 engine is a given, with a bonkers hybrid version packing roughly 800 horsepower like the 2017 concept to arrive in the years to come.