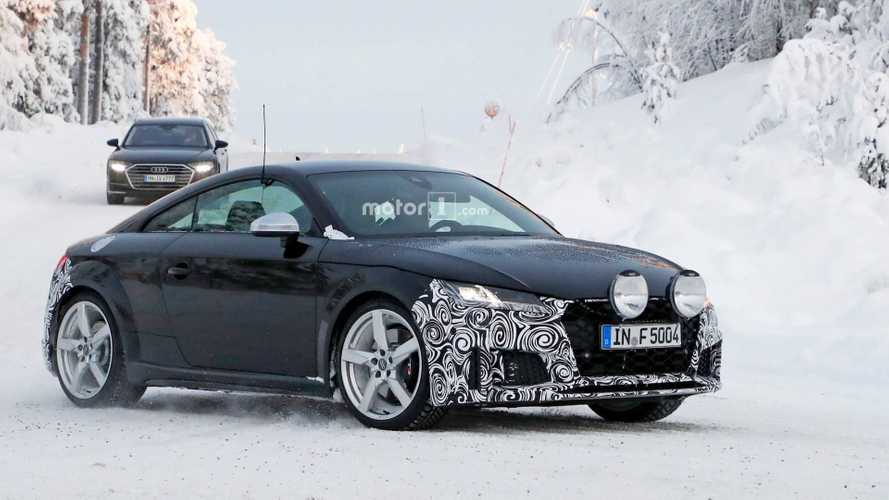 The updated TT range should hit dealerships sometime in 2019.

Audi is prepping its entire TT range for a mid-cycle facelift. Already we’ve seen the base TT with big fog lights, testing out its new look on the snowy streets of Germany, as well as the hardcore RS model. Now the hotted-up TTS is getting a similar treatment, touting massive fog lights and hiding a new look in preparation for its debut, likely late in 2018.

Like the TT and the TT RS spy shots before it, the TTS appears to be undergoing only a minor facelift. Both the front fascia and the rear are covered up almost completely in camouflage. The rest of the body, though, remains unchanged. It will still be a few years before we see Audi give the TT an all-new platform, as the current underpinnings were introduced as recently as 2014.

In addition to the new TTS Coupe, we also see the convertible variant hiding in the background of some of the images. Like the coupe, the Roadster is well covered up in both in the front and rear, with no distinguishable new features to take note of. As mentioned, this is expected to be a modest refresh.

As far as power is concerned, don’t expect much of a change. Audi has been keeping quiet in regards to the updated TT, TTS, and hardcore TT RS performance figures. The base TT currently uses a 2.0-liter turbocharged engine to deliver 220 horsepower (164 kilowatts), paired to a dual-clutch automatic. The TTS, meanwhile, uses the same engine to produce 292 hp (217 kW) and 280 pound-feet (379 Newton-meters) of torque, while the range-topping TT RS uses a 2.5-liter turbocharged units to produce a hefty 400 hp (298 kW) and 354 lb-ft (479 Nm) of torque.

We should know all the performance details when the range debuts. The facelifted sports car is expected to be shown sometime late in 2018 – potentially at the L.A. Auto Show – before arriving in dealerships in early 2019 as a 2020 model.