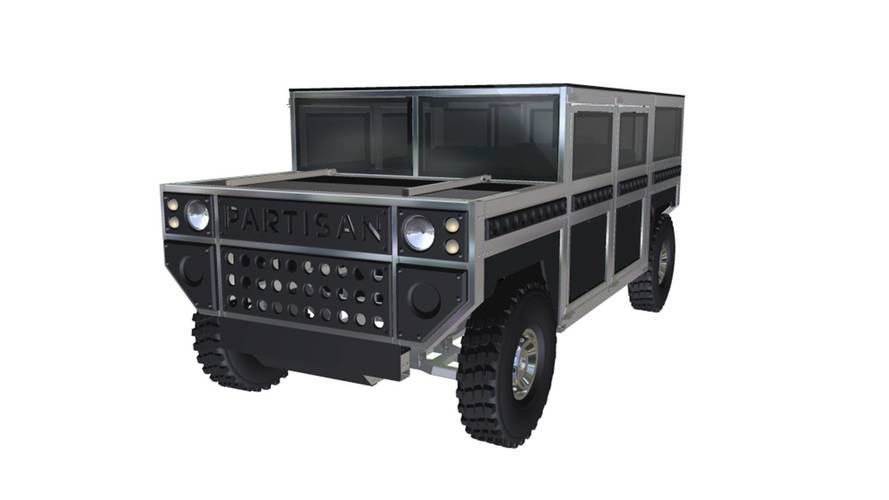 Partisan Motors thinks the boxiest SUV in the world would be the right fit for Vladimir Putin's fleet.

After expressing the desire to go to Mars and offer cheap transportation for militaries, Partisan Motors latest wish with its new Kremlin is to join the presidential motorcade of Vladimir Putin. The new iteration of Partisan's ultra-boxy SUV features a long-wheelbase five-door body and uses an electric powertrain.

Partisan sees the Kremlin serving a security role in Putin's motorcade. Off-road-oriented parts like the air suspension would give the SUV greater prowess in rugged terrain. For protecting the officers inside, there's room on the vehicle's exterior for mounting ballistic armor, and space underneath allows for fitting a V-shaped hull for protecting against explosions underneath the Kremlin.

As a variant of the Partisan One, the Kremlin would retain the ability for forces to quickly assemble the body by fastening together stainless steel panels into the rectangular body. Power comes purely from an electric motor driving each wheel, but there's a generator under the hood for charging the batteries. Partisan Motors asserts that even with armor in place that the Kremlin has supercar levels of acceleration, but the firm doesn't performance specs, which makes the claim even more dubious.

Partisan Motors recently earned attention for a publicity stunt where the company showed off a version of its SUV for exploring Mars. The company made the announcement at the same time Elon Musk was launching his Tesla Roadster into space inside the SpaceX Falcon Heavy rocket. The Partisan One Mars Edition would have eschewed steel panels in favor of carbon fiber to save weight. The firm's idea was that future explorers on the red planet could have assembled the SUV upon arriving there.

Partisan Motors' original plan was to build an affordable, inexpensive SUV for militaries to assemble in the field, and this concept filled a legitimate role. Using such a vehicle for a presidential motorcade seems less necessary since these parades are never spontaneous affairs, and it would be relatively easy to arrange for more capable transportation for security forces.

October 10, 2017, all the leading world news agencies published on their pages a message that the German designer of Russian origin, Dr. Yuri Postnikov and his assistant, Dr. Andrey Safonov, presented to the general public their latest development the universal army SUV Partisan One, created by his company PARTISAN MOTORS.

The presented car PARTISAN ONE stands out very constructively against the background of its counterparts, and contrasts sharply with them not only with its large dimensions, but primarily with its square shapes, straight lines of body contours and deliberate primitivism of appearance, as if the absence of any design.

On February 6 of this year, on the eve of Elon Mask launching a rocket to Mars, the world news spread the news that PARTISAN MOTORS presented its development of PARTISAN ONE MARS EDITION designed to conquer the planets of the Solar System and suggested that Elon Mask not take the time to send the missile to Mars its first electric Tesla.

The most authoritative Russian news agency Kommersant, summing up the results of 2017, awarded Doctor Yury Postnikov the title of "Designer of the Year".

This time the company PARTISAN MOTORS presents its latest development PARTISAN KREMLIN - five-doors long-wheelbase fully electric version of its car PARTISAN ONE, intended for the role of an off-road vehicle accompanying the tuples of the first persons of the states.

To this end, PARTISAN MOTORS has developed a fully electric version of the PARTISAN KREMLIN car with a quick-assembled body made of high-strength stainless steel profiles of closed rectangular section. The internal space of the double floor is filled with electric batteries that supply electric motors. Under the hood is a stand-alone unit with a turbo-generator to charge the on-board batteries.
.

For the drive of each wheel responds to its powerful electric motor - thereby removing a heap of heavy and bulky mechanisms like a box, distribution, cardan shafts, reducing weight, dramatically improving the reliability of the car, its survivability and maintainability in operation. In this case, the car, even in the armored version of the highest class performance will have an acceleration dynamics of the sports supercar.

Features of the design with a spatial load-bearing frame made of stainless profiles of closed cross-section make it possible to realize the almost bus internal space of an off-road support vehicle, the maximum possible protection of the crew, and absolutely flat floor without a protruding tunnel in the middle ensures the convenience of landing and disembarking of fully equipped security officers inside the machine.

A simple and quick installation of external armored armor plates on the supporting power skeleton makes it possible to realize the maximum possible class of ballistic protection for the crew. The design of the double bottom is adapted to install not only the batteries, but also an anti-mine V-shaped shield, which reliably protects both the crew and all vital organs of the car itself.

The impressive design of the independent air suspension on the wishbones provides high ride smoothness, speed and maneuverability, allows for wide adjustment of the clearance.

The company PARTISAN MOTORS hopes that the presented SUV accompanying PARTISAN KREMLIN can find its worthy place among the cars of the presidential motorcade in Russia, especially since at the end of June 2017 all Russian news agencies disseminated information that "FSUE" NAMI "suspended work on an off-road vehicle from the project "Cortege" for an indefinite period because of a lack of resources. "