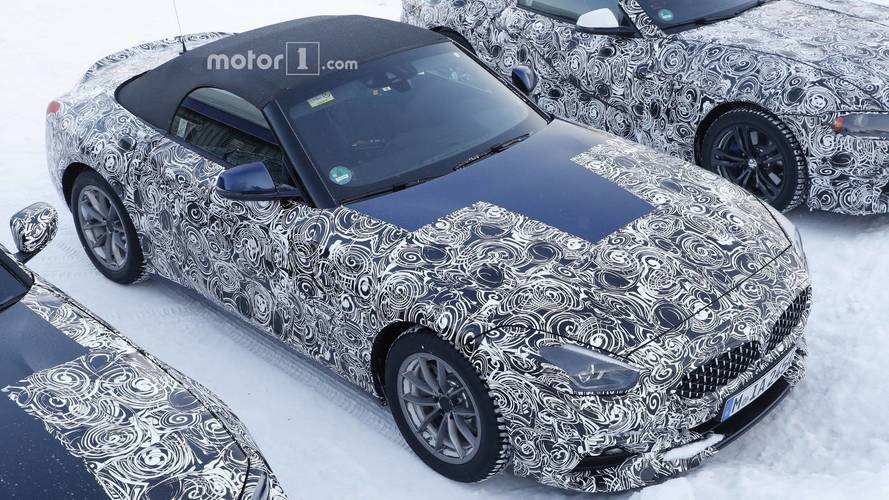 Unsurprisingly, the roadster was spotted sitting next to its Toyota coupe counterpart, the reborn Supra.

While Toyota has (finally) announced the much-awaited Supra revival will debut in the metal on March 6 at the Geneva Motor Show, BMW hasn’t provided yet an exact date for the Z4’s official reveal. The couple was seen the other day in northern Europe during what must have been a lunch break. The latest batch of spy images provides us with the best look yet at the new Z4 considering the photos were shot from a very close distance and the subject of the photography was a near-production prototype.

Gone are the annoying plastic layers of disguise as the test vehicle only had the familiar swirly camo applied onto the blue body. The production-spec headlights were there, as were the fancy taillights, which could come with OLED technology as seen in the Audi TT RS. BMW’s new take on the kidney grille is easily noticeable and is a subtle evolution of what the namesake concept had.

With a bigger set of alloy wheels, the new Z4 should look even nicer than this prototype and we are anxious to see what’s hiding underneath the black and white camouflage. Considering the concept unveiled last year was a stunner, we have high expectations from the road-going model and hopefully it won’t be watered down too much on its way to the assembly line.

In regards to the available versions, BMW has made it clear it has no plans to come out with a Z4 M, but it has hinted an M Performance derivative will eventually see the light of day. Rumor has it the hotter model will be blessed with a turbocharged straight-six good for as much as 385 horsepower, though nothing is official at this point. Lesser models will have to make do with four-cylinder engines rated at 180 hp and 250 hp, if the latest reports are accurate.

There’s a good chance we will get to see the production-ready Z4 in the second half of the year, quite possibly at the Paris Motor Show in early October. Sales should kick off before the end of the year or early 2019.