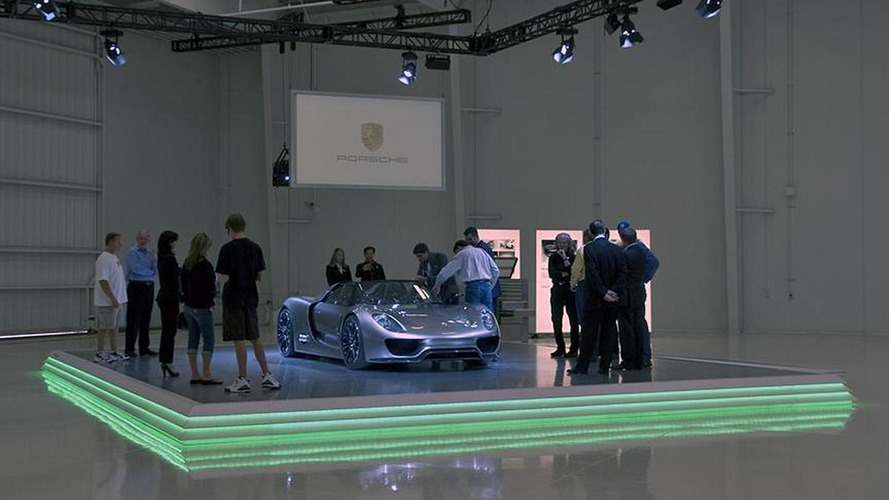 Get the latest on the Porsche 918 Spyder... will it have more than 700 hp? Find out the details inside.

When the Porsche 918 Spyder comes to market, expect it to have a bigger engine than the 493-horsepower (368-kW, 500-PS) 3.4-liter V8 racing engine currently in use.  Both the displacement and the horsepower could get bumped up, which would combine with three 40-kW electric motors for more than the reported 708 horsepower (528 kW, 718 PS), according to a TeamSpeed.com forum poster.

The TeamSpeed member attended a private Porsche event for the anticipated hybrid in Pebble Beach.  At the event, it was reportedly announced that the show car, still under construction, had a fully-functioning all-electric mode with regenerative brakes and plug-in charging.

However, once the engine is bolstered up, the production model will only be sold with a PDK transmission.  Although currently all carbon fiber, the consumer model will have improved crash safety thanks to aluminum at the front end.  It rides on 22-inch wheels, though that could change once orders are taken.  Meanwhile, it is uncertain if tailpipes will stay on the side, or if they will move to the rear.

The car will be sold with both hard and soft tops, the poster says, but no RS version is being planned.  Side mirrors could be replaced with cameras, relaying a video image to a built-in display at the instrument cluster.  Also inside, the driver will control the infotainment system via a touch screen.

According to the TeamSpeed post, the Porsche 918 Spyder is currently being tested in the form of several mules wearing the Boxster/Cayman body.  The car is expected to be priced at about €500,000, with production limited to 1,200 units.

Expect more info and video in the coming days.