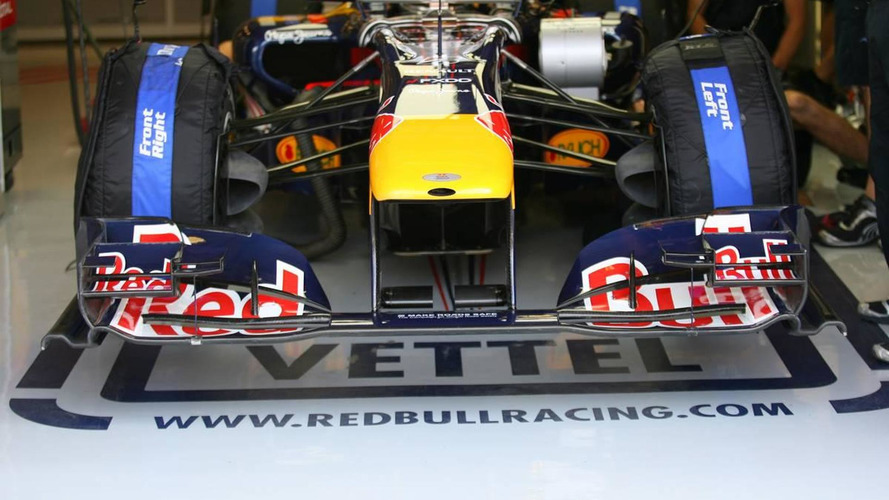 Pressure from McLaren, Mercedes and perhaps other rivals of the Austrian owned team has resulted in new wing flexibility tests being devised by the FIA for the forthcoming Belgian grand prix.

Those who believe only Red Bull's front wing endplates are flexing appear to be wide of the mark.

Pressure from McLaren, Mercedes and perhaps other rivals of the Austrian owned team has resulted in new wing flexibility tests being devised by the FIA for the forthcoming Belgian grand prix.

Reports indicate that the new tests will involve the doubling of the testing load from 50kg to 100kg, amid suspicions Red Bull and Ferrari devised a way to have the endplates bend under disproportionately higher loads out on track.

But for Red Bull, there seems to be a much more complex story to emerge.

"It's very clever," said McLaren's Jenson Button on Thursday, whilst preparing for the London Triathlon.

"We've just got to understand it -- and as quickly as possible," he is quoted by the Telegraph.

After Hockenheim, where Ferrari finally got on terms with Red Bull, the photographs of the bending wings started doing the rounds.

And before running the F10s a few days later, Ferrari chief engineer Chris Dyer said the team was set to consider "some different front wing options" in Hungary.

The rumours about Ferrari's flexing wings subsequently quietened, as the focus on the RB6 intensified.

It is now being suggested in F1 circles that flexing endplates is only part of Red Bull's story.

"It doesn't just seem to be their wing that flexes," Button had said in Hungary.

Indeed, further scrutiny of the flexi-wing photographs from Hockenheim and Hungary seem to show Red Bull's entire front nose - not just the wing and its extremities - much closer to the ground than any of their rivals, including Ferrari.

How the team is achieving this is unknown, but the manner in which Sebastian Vettel's prototype broke at the mounting at high speed on Hangar straight during third practice at Silverstone might be a clue.

Another theory is that the front of the floor of the car is flexing towards the ground on track, whilst the rear is lifting.

And it is believed the flexing of the rear floor in particular would have a radical effect in terms of the front wing height.