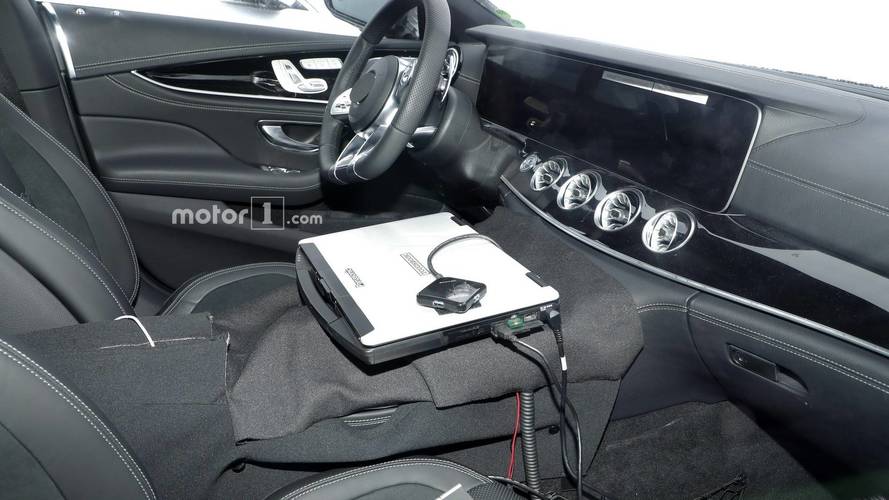 The cabin is showing the model's CLS roots.

Just days after Mercedes-AMG previewed the confusingly named GT Coupe, our spies have managed to get up close and personal with a near-production prototype that was resting in a parking lot after what must have been a hard day’s work. While the official teaser from Affalterbach focused solely on the exterior design, as luck would have it, the newest batch of spy shots allows us to take a good look inside the cabin.

Yes, the dashboard looks virtually the same as the one you get in the new CLS, but is that such a bad thing at the end of the day? Well, some would argue that Mercedes-AMG should have put more effort into making the cabin a bit more exciting taking into account the four-door GT will likely command a significant premium over the regular CLS. Bear in mind this is not the final car, so there still could be some changes here and here to differentiate the two heavily related models.

Acting as a direct successor to the CLS 63, the highly anticipated Porsche Panamera fighter will be revealed in full at the beginning of next month during the 88th Geneva Motor Show. The concept’s bonkers hybrid powertrain won’t be available from day one, but there are reasons to believe it will eventually be offered for the road-going model with a gargantuan combined output of more than 800 hp.

Meanwhile, the Switzerland-bound car will rock a biturbo 4.0-liter V8 expected to generate significantly more than the 429 hp available in the recently launched Mercedes-AMG CLS 53 to make it worthy of its higher price tag. The eight-cylinder engine born in Affalterbach can produce a little over 600 hp in the E63 S, but it remains to be seen whether the new member of the AMG family will be able to match that. If it will, it means the GT Coupe will outshine the 550-hp Panamera Turbo.