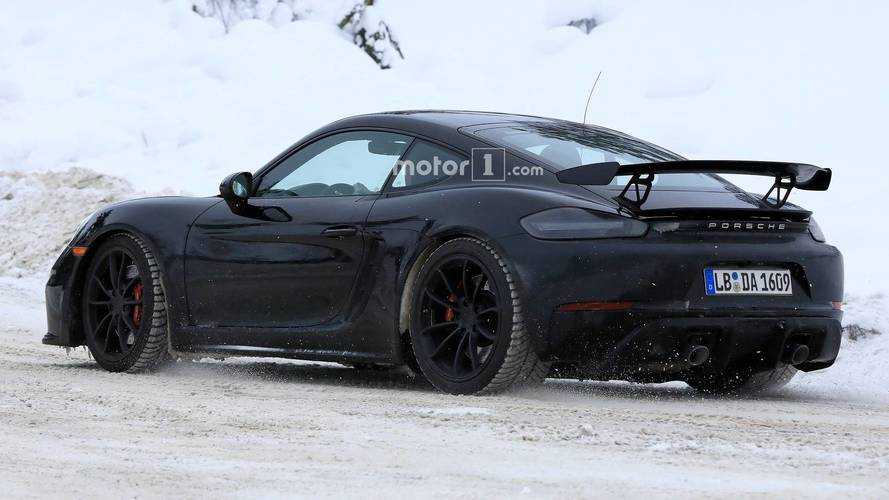 Porsche was seen the other day in northern Europe while perfecting what will become the range-topping 718 Cayman version taking the shape of the mighty GT4. Positioned above the recently launched GTS, the new crown jewel of the Cayman family appears to be virtually undisguised, thus hinting that an official reveal is right around the corner. Our money is on the Geneva Motor Show set to open its doors at the beginning of next month.

There are quite a few differences between the GTS and the forthcoming GT4, starting at the front where the redesigned bumper hosts enlarged air vents providing better cooling. Right below the hood, on the upper section of the bumper, there’s a wide slat akin to what the 911 GT3 / GT3 RS feature.

Speaking of the higher-end GT3 models from the expansive 911 family, the naturally aspirated 4.0-liter gasoline engine is expected to trickle down onto the 718 Cayman GT4. It will allegedly be detuned, but it should stick pack more than 400 horsepower, so expect a bump in output over the previous GT4 of at least 15 hp. Corroborated with a very probable weight loss, the new iteration of the hardcore Cayman is shaping up to be faster and more agile around the corners than its predecessor.

Getting back to the prototype at hand, the back of the car is also exhibiting some major changes compared to the GTS. The most obvious novelty is the addition of a fixed rear wing, along with a meaner diffuser featuring two large exhaust tips that no longer sit next to each other as they do on the GTS. While the taillights as well as the headlights appear to be virtually the same as those of the GTS, there could be some changes to further differentiate the two models.

We are also expecting to see a re-tuned suspension, bespoke alloy wheels, and upgraded brakes to round off the package and make the GT4 justify what will be a significant premium over the GTS. By the way, the latter starts off at $79,800 in the United States. Considering a base 911 begins at $91,100, some folks will have to make a difficult decision: go with the Cayman GT4 or get a standard 911? Factor in the 718 Boxster Spyder, it will be quite tricky to pick one.