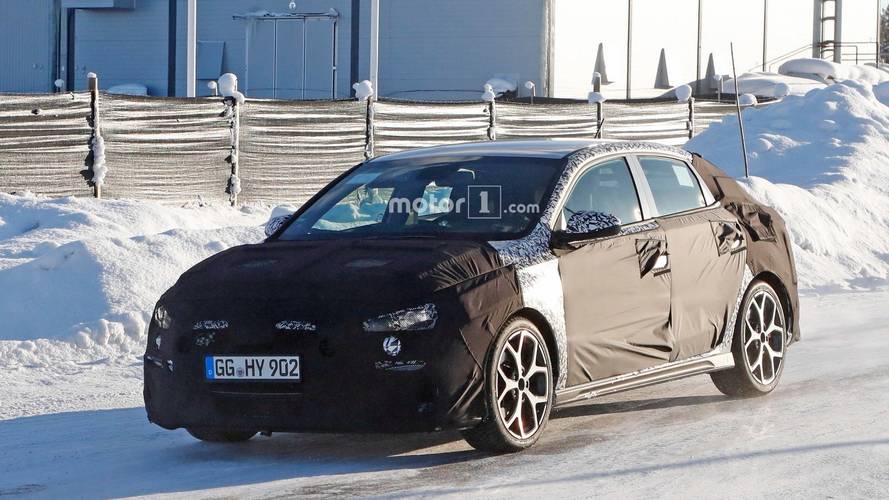 Expect similar performance as the i30 N hatchback but with a more stylish rear.

Hyundai's lineup of N performance models is growing steadily. After the launch of the i30 N hatchback and announcement of the Veloster N, the division now has a meaner take on the i30 Fastback under development. These spy shots provide the first chance to check it out.

As its name implies, the i30 Fastback would be generally the same as the existing hatchback but graft a sleeker rear end onto the back. These spy shots prove a camouflaged look at the new tail (see it undisguised, here). The design appears to sacrifice some cargo space for a more stylish look by having the roof arch downwards starting just behind the C-pillar. These photos show that the design retains the horizontally positioned taillights and dual exhausts from the i30 N hatchback.

Mechanically, the i30 Fastback would likely be the same as its hot hatch sibling (gallery above). Under the hood, buyers would get a 2.0-liter turbocharged four-cylinder with 247 horsepower (184 kilowatts) in standard guise. The optional Performance Pack would push the output to 271 hp (202 kW). An electronically controlled front differential, six-speed manual, and five selectable drive modes would let drivers make the most of this performance.

The more shapely roof would have a negligible effect on performance. Expect figures similar to the hatchback's standard sprint to 62 miles per hour (96 kilometers per hour) in 6.4 seconds. The Performance Pack cuts this figure to 6.2 seconds. Hyundai imposes a restricted top speed of 155 mph (250 kph) regardless of version.

We don't yet know when the i30 N Fastback will go on sale. It will likely be sometime after the Veloster N in the fourth quarter of 2018, though. Upon arrival, it'll fill a hole in the N model lineup. The Veloster with its semi-three-door layout will be the most aggressive member of the pack. The Fastback will occupy a spot in the middle in terms of utility, and the i30 N hatchback will offer a combination of five-door usefulness but with impressive performance.