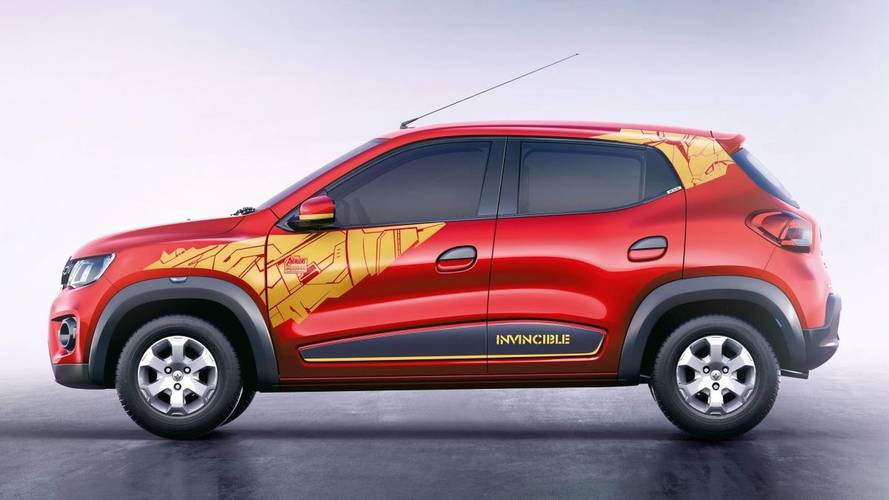 Talk about an interesting tie-in.

When a movie becomes a global blockbuster, the heroes become international symbols with instantly recognizable faces. Merchandise flows around the world, often spreading western culture to far reaches of the world. If there's a way to make a buck putting Captain America on a toaster, some company somewhere has done it. A perfect example of this globalization is Renault's two new Avengers-themed Kwid crossovers. One is done in the guise of Iron Man while the other is quite patriotic with Captain America.

The Iron Man compact crossover sports the super hero's gold and red trademark appearance. The gold accents the otherwise red Kwid with unique graphics, and grille insert. Along the bottom of the doors reads the word "INVINCIBLE." The graphics include Iron Man's Arc reactor design.

The Captain American Kwid is white with red and blue accents. "SUPER SOLDIER" adorns the bottom of the rear doors. The graphics are very American with a strong sense of patriotism. There are a lot of stars. The hood sports the emblem found on Captain America's trademark shield. Both designs certainly stand out.

The Renault Kwid Super Hero Edition is offered only with the 1.0-liter gasoline engine, which makes 67 horsepower and 67 pound-feet of torque. These unique Kwid crossovers have superhero personalities even if they lack the speed to keep up with The Avengers. A five-speed manual transmission is standard while an automatic is optional.

In 2018, movie studios and automakers teaming up is nothing rare. Nissan and the Star Wars franchise are creating some unique offerings. Chevrolet has Transformers while Fiat Chrysler Automobiles has a close relationship with the Fast and Furious franchise. Renault teaming up with the Avengers seems natural at this point.