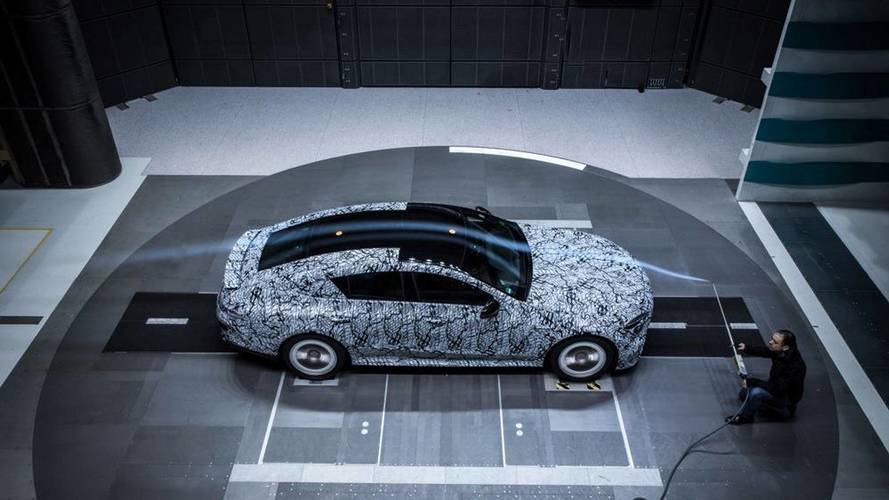 Future versions of the sedan will reportedly use a plug-in hybrid with over 800 hp.

[UPDATE] Mercedes-AMG has released three additional teaser images with the GT Coupe, this time around showing the Panamera fighter in the wind tunnel.

After lots of speculation, Mercedes-Benz finally confirms the name and debut date for it's upcoming performance sedan. The four-door goes by the confusing name Mercedes-AMG GT Coupe and premieres in March at the Geneva Motor Show.

Mercedes accompanies this tantalizing info with a trio of teaser photos of the upcoming sedan. Unfortunately, these shots show the four-door in heavy camouflage like earlier test mules. Other recent photos (below) have provided a much better look at the forthcoming model, though.

The Mercedes-AMG GT Coupe is a road-going interpretation of 2017's Mercedes-AMG GT Concept. They share design cues like a wide grille with vertical slats and a trio of large inlets in the front fascia. A steeply raked A-pillar leads back to a flowing roof and rounded tail. Spy shots show an active spoiler that can deploy from the back, too. The elements combine to create a sedan that's both sleek and sporty.

Mercedes doesn't intend to create a new CLS 63, and the GT Coupe would essentially take its spot in the company's lineup. With this positioning in mind, expect the AMG sedan to pack a luxurious cabin in addition to its performance. High-tech touches like the company's digital instrument panel and large infotainment screen are very likely.

Rumors suggest that the AMG GT Coupe would use the division's 4.0-liter biturbo V8 with power in excess of 600 horsepower (447 kilowatts). A future range-topping version would possibly add plug-in hybrid assistance to the powerful engine and push the output to around 800 hp (597 kW).

With the AMG GT Coupe debuting in March, expect the first sales to begin in some major markets before the end of the year.