2019 BMW 3 Series Caught On Video Careening Around The 'Ring

If the tortured tires are any indication, the sport sedan still loves to corner.

BMW has been quite active with testing its new 3 Series in the public eye. We’ve caught the car several times over the past year or so, operating in all conditions and with varying degrees of camouflage. It’s one thing to see a photo, but now we have spy video complied of the next-generation sedan in action, and it certainly appears to be as athletic as ever.

The footage spans nearly two minutes, with most of the action occurring at the Nürburgring. There isn’t a single pass by the camera where the tires aren’t being tortured, save for the opening and closing shots that occurred off the track. Best of all, our ears get a taste of the Bimmer’s exhaust note, confirming the presence of a gutsy inline six under the hood. 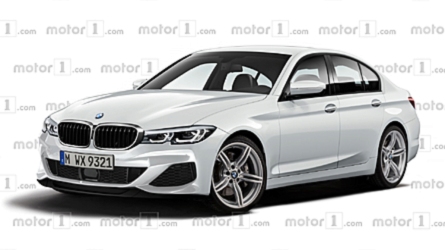 It’s true we’ve seen many spy photos over the past year, but the footage in this video is believed to be the final production version of the car, wearing all the proper body panels and equipped with production-spec lights. In fact, our spy sources spent some time working on renderings of what this car could look like when the camo wrap is peeled away, revealing a conservative update that draws some resemblance to the larger 5 series.

Underneath, however, is a new CLAR platform that will shave weight while also opening up the interior a bit more. Specific engine options aren’t yet fully known, but a range-topping 340-horsepower (254 kW) biturbo inline six is said to be in the cards. Hybrid models are also expected, with all-wheel drive optional. And yes, after the new car hits the streets a pavement-ripping M3 will follow.

The reveal date is still unknown, though it will appear this year. Right now, the Frankfurt Motor Show in September is a likely candidate, but there’s certainly a chance we could see it sooner.