Five colors of stripes, carbon fiber interior trim, a lower suspension, and upgraded exhausts are among the improvements.

Dodge will let buyers dress up their new 2018 Durango with a suite of new optional extras for the R/T and SRT trim levels. The parts give the SUVs a more aggressive look and sharpen their capabilities to match the styling improvements.

On the outside, customers can add a pair of stripes over the hood, roof, and rear. They are available in five colors: Bright Blue, Flame Red, Gunmetal Low Gloss metallic, Low Gloss Black, and Sterling Silver metallic. The stylish upgrade runs $1,195.

Inside, buyers can add carbon fiber interior trim that covers the instrument panel and door bezels. The package also includes faux-suede material for the headliner and accent paint around the speakers. The upgrade goes for $2,495. 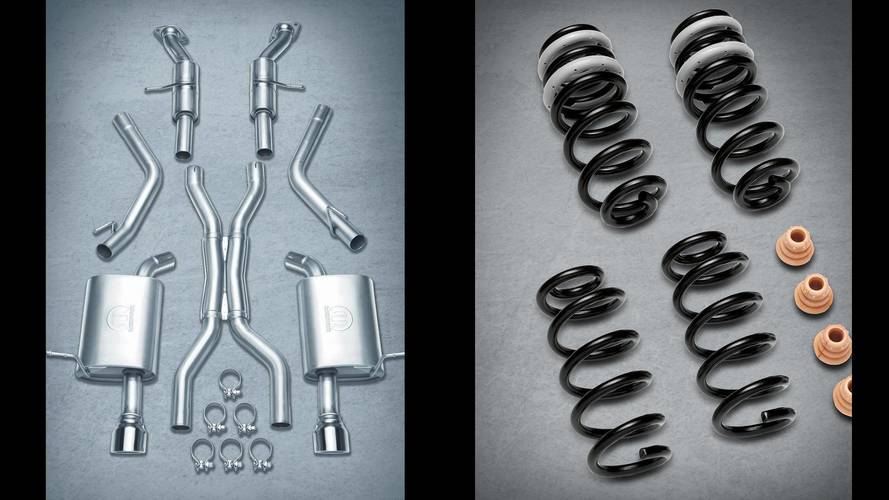 The engine's performance remains the same, but customers can still upgrade the SUV's abilities. A replacement exhaust features better flow than the stock unit and uses 304 stainless steel for improved corrosion resistance. It ends with a pair of four-inch diameter polished, circular tips. The piece sells for $1,850 on the Durango SRT or $1,595 on the R/T trim level.

There's also a new set of lowering springs for the Durango SRT. The pieces drop the ride height by 0.6 inches (15 millimeters). The company claims that the engineers use proprietary data that's unavailable to aftermarket tuners so that the parts work perfectly with the stock dampers. The components contribute to reducing rear-end squat when accelerating, limiting nose dive when braking, and lessening body roll when turning. The springs go for $325.

Dodge will showcase a Durango with these upgrades at the upcoming Chicago Auto Show, and Motor1.com will be at the event to check them out.

·       Dodge Durango SRT is the most powerful and fastest three-row SUV with its legendary 475-horsepower HEMI® V-8 engine and National Hot Rod Association–certified quarter-mile time of 12.9 seconds that also outhauls every three-row SUV on the road with best-in-class towing capability of 8,700 pounds

February 7, 2018 , Auburn Hills, Mich. - Performance enthusiasts looking for a three-row SUV with a factory-custom look need look no further than the 2018 Dodge Durango.

“Our Dodge//SRT performance enthusiasts are always looking for ways to make their vehicle their own,” said Steve Beahm, Head of Passenger Cars, Dodge//SRT, Chrysler and FIAT, FCA – North America. “The available stripes and carbon fiber throughout the interior really give Durango a custom look from the factory, and they are perfectly complemented by Mopar’s available exhaust systems and performance springs, which make Durango even more fun to drive.”

New features available in the coming months include:

·       Mopar’s performance lowering spring kit enhances the Durango SRT’s already outstanding high-speed cornering stability and consistency. The new springs lower the fastest SUV in its class an average of 15 mm (0.6 inches) closer to the pavement for improved handling and an in-your-face vehicle stance. As with the performance exhaust, Mopar worked closely with Dodge//SRT engineers and used proprietary data — unavailable to the aftermarket — to tune the lowering springs to the factory-fitted dampers. Performance gains include less rear-end squat during acceleration, less nose dive under braking and reduced body roll while cornering. The new performance lowering spring kit (Part Number 77072488) is priced at a U.S. MSRP of $325 and will be available in March.