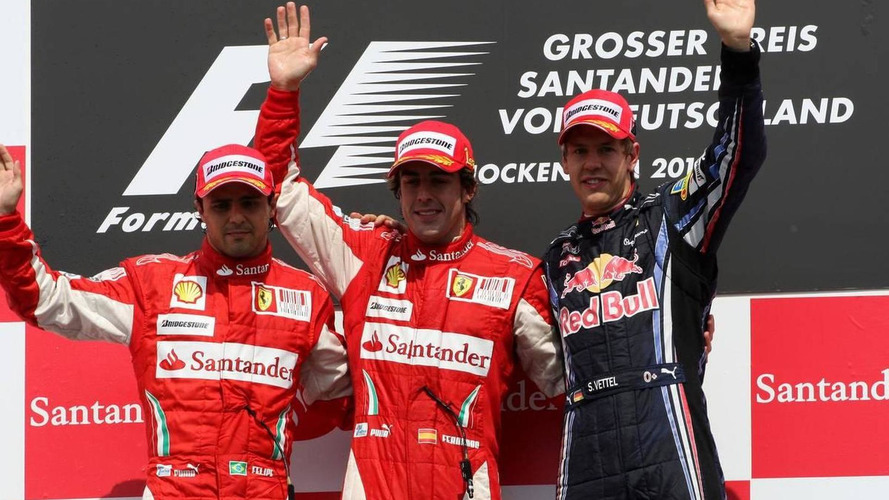 Sunday's German grand prix began amid a burgeoning flexible wing saga, and ended with a new scandal about team orders.

After a team one-two, and soaked in champagne, Ferrari team boss Stefano Domenicali was hounded in the Hockenheim pitlane by reporters accusing him of illegally ordering Felipe Massa to hand his victory to Fernando Alonso.

"This is not true," Italian Domenicali told an angry Eddie Jordan on British television BBC.

Red Bull's Christian Horner, earlier accused by his rivals of running an illegally-flexing front wing on the RB6 in Germany, said the FIA stewards should actually be probing Ferrari's alleged rules breach.

"That was the clearest team order I've ever seen. As clear as 2002," said the Briton, referring to the Austrian grand prix of that year, when then Ferrari team boss Jean Todt ordered Rubens Barrichello aside for Michael Schumacher.

Fascinatingly, Todt is now president of the governing FIA.

"The difference with 2002 was that there was no rule (about team orders) then," said Jordan. "This is ten times worse."

The alleged team order at Hockenheim began with Alonso pleading on the radio that sitting behind Massa was "ridiculous".

Shortly afterwards, Massa's engineer Rob Smedley told Massa on the radio: "Ok, so, 'Fernando is faster than you'. Can you confirm you understand that message?"

Massa, 29, then deliberately slowed down on a straight and let Alonso pass.

"To be honest, I don't think so," he said when asked if he thought the stewards would be looking into the incident.

Asked if he thought he deserved to win on Sunday, which is the one-year anniversary of his horror qualifying accident in Hungary last season, Massa answered: "Well, I think so."

As for whether he deliberately moved aside, the Brazilian said: "Well, I don't think I need to say anything about that. He passed me."

So obvious was the team order, Smedley actually apologised - "good lad, sorry" - to Massa after the race.

"The apology is just that I'm sorry it happened, I'm sorry he (Alonso) came through," Smedley, who also called Massa "very, very, very magnanimous" on the radio, explained to the BBC.

Alonso, despite asking on the slowing-down lap if Massa was ok, also denied he had been deliberately let through.

"I don't know what happened; I saw Felipe a little bit slow and I took the opportunity," said the Spaniard.

Massa added: "We work for the team, that's the only thing I feel."

Schumacher said he is still very close to his former Ferrari teammate Massa, but admitted he would have done "exactly the same" if he had been sitting on the pitwall on Sunday.

"In principle I fully accept it (team orders). There is only one target: winning the title," said the seven time world champion.

In the championship, the McLaren drivers retain their lead over the now points-tied Red Bulls, ahead of Hockenheim winner Fernando Alonso.