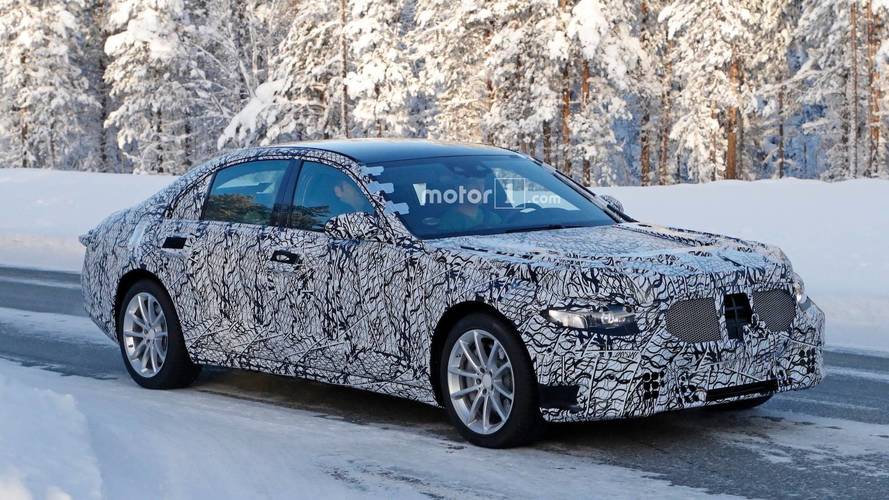 This is our first look at the S-Class wearing production sheet metal.

Even though the S-Class range was revised only recently, an all-new version of the sporty sedan is already on the way. Scheduled to make its debut sometime by the end of the decade, the S-Class will be all new both inside and out. While previous images have shown the vehicle wearing a faux last-gen body, these new images picture the sedan wearing production sheet metal… well covered up in camouflage, of course.

The new photos give us our first look yet at the S-Class wearing its production skin. It’s hard to make out any distinguishing new features under all that camo, but there are a few key details that hint as to the look up the upcoming new S-Class.

The front fascia of the updated Benz will be significantly restyled. Revisions to the grille, the air intakes, and the bumper will all be seen. We expect the front of the S-Class to adopt similar styling to the new CLS, but with a more upscale theme all its own. The back will be all new too, with a reshaped diffuser, an updated bumper, and all-new taillights of course.

The most significant update will come in the body, which will see an extensive use of lightweight materials. The new S-Class will be lighter than the current model thanks to aluminum combined with carbon fiber reinforced plastics (CFRP). More than three years ago Mercedes-Benz S-Class Chief Engineer, Hermann-Joseph Storp, announced that the W223 S-Class would be "even greener" thanks to its new lightweight construction.

Apart from the details already mentioned, we don’t know much else about the upcoming new S-Class. Rumors suggest that we could see the "SEC" moniker make its way back into the range in the form of a four-door coupe, but we won’t know all the details until the S-Class makes its debut in full, likely sometime in 2020.