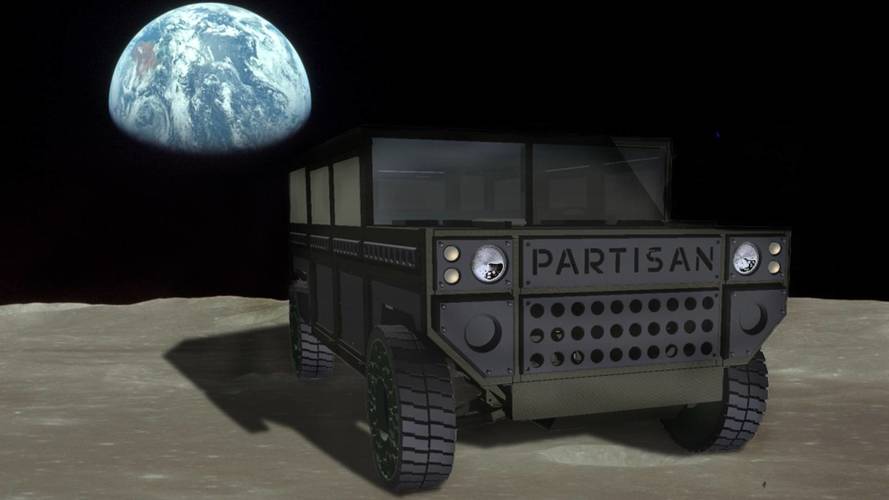 An SUV is way more practical for exploring planets than a Tesla Roadster.

Oh, Partisan Motors. You remember this company, the brainchild of one Dr. Juri Postnikov and home to the Partisan One military SUV – the green/black rectangle-on-wheels that looks like it was built with a big erector set. The one that intentionally uses a simple design so it can be quickly and easily assembled. The one we covered back in October and is purportedly backed by a 100-year warranty. Yes, that one.

It seems Postnikov has become a bit more ambitious since then. He reckons his simple-is-better SUV would be ideal for exploring Mars. No, we’re not talking about Mars, Pennsylvania – which by the way is a neat little town north of Pittsburgh. We mean the planet, named for the Roman god of war and home to little green men, not to mention a few NASA rovers.

The sudden motivation for this is apparently Elon Musk, who is on the cusp of shooting a Tesla Roadster into deep space as of this writing. At approximately 1:30 p.m. Eastern Time (17:00 GMT) on February 6, his Roadster is scheduled to lift off courtesy of a SpaceX Falcon Heavy rocket, with an orbit of Mars or possibly beyond being the target destination. Whether the rocket even lifts off, however, is still the subject of some debate.

Meanwhile, Postnikov says the Roadster would be little more than a music box that nobody will hear on Mars, because amazingly enough there’s neither people nor air there. Instead, he proposes sending components of a newly developed version of the Partisan One SUV made from carbon fiber and powered by electric motors at each wheel. It’s called, imaginatively enough, the Partisan One Mars Edition, and according to the company’s press release (available below), it’s already been developed.

Postnikov proposes sending the Partisan One Mars Edition to the Red Planet in pieces on multiple rockets. Its simple design would mean it could be easily assembled on the planet, but here’s where things get really weird. In the release, Postnikov says Musk himself could assemble it. On Mars. When he arrives with his crew. Yes, Dr. Postnikov wants Elon Musk and posse to cruise Mars in a Partisan SUV. Riiiiight.

Of course, such things are silly. You don’t simply go to Mars without first testing your as-yet-unseen space SUV on the moon, hence the picture above which doesn't appear doctored in any way. It's also the only glimpse we've had of this machine, so we'll revisit the original Partisan One in the gallery below for a better idea of how this thing might look.

Roadsters in space? SUVs on Mars? What strange and interesting times we live in.

October 10, 2017, all the leading world news agencies published on their pages a message that the German designer of Russian origin, Dr. Yuri Postnikov and his assistant, Dr. Andrey Safonov, presented to the general public their latest development the universal army SUV Partisan One, created by his company PARTISAN MOTORS.

An important reason for such a general excitement was the PR campaign, which was competently carried out by the manufacturer: the company gives a 100-year warranty on its cars.

In addition, the presented car Partisan One stands out very constructively against the background of its counterparts, and contrasts sharply with them not only with its large dimensions, but first of all with its square shapes, straight lines of body contours and deliberate primitivism of appearance, as if lack of any design.

The most authoritative Russian news agency Kommersant, summing up the results of 2017, awarded Doctor Yury Postnikov the title of "Designer of the Year".

The company PARTISAN MOTORS preaches a conscious return to the values that were in demand in the automotive designs of the early 20th century, when there were few cars themselves, asphalt roads practically did not exist, and each trip was akin to an adventurous adventure: strength, functionality, big wheels, maintainability , a long period of operation.

This time the company PARTISAN MOTORS presents its latest development PARTISAN ONE MARS EDITION, designed to conquer the planets of the Solar System.

At the beginning of the 21st century, mankind once again turned to the idea of interplanetary travel within the Solar System: thoroughly preparing for a flight to Mars, going back to the Moon, plans to establish stationary bases and even large settlements there.

Implementation of such grandiose plans is impossible without special vehicles on which immigrants can travel on the surface of the mastered planets, transport cargo, conduct expeditions and geological exploration.

In the history of such vehicles are known, as Soviet lunar rovers and American lunomobiles, but this technique, designed and tested in the 60s of the last century, was built in single samples and cost fabulous money. It, alas, is not suitable for mass production and those tasks of conquest and development of planets, which puts humanity now.

The company PARTISAN MOTORS has developed a fully electric version of the car PARTISAN ONE MARS EDITION with a quick-assembled body made of super-strong carbon-fiber profiles of closed rectangular section. The internal cavities of the profiles are filled with pre-charged electric batteries, which, when assembled, will be combined into one common on-board network supplying electric motors. The surface of the hood, roof and lateral plumage of this car is covered with efficient solar panels.

For the drive of each wheel responds to its own electric motor - thereby eliminating a bunch of heavy and bulky mechanisms such as a box, distribution, cardan shafts, reducing weight, dramatically increases the reliability of the car, its survivability and maintainability when operating on a foreign planet. Our car will allow astronauts to travel safely and quickly on foreign planets with complete absence of any roads at all.

Features of the design with a spatial load-bearing power frame made of heavy-duty carbon profiles of a closed section make it possible to realize the almost bus internal space of a space vehicle, the maximum possible protection of the crew, and absolutely flat floor without a protruding tunnel in the middle provides the convenience of landing-disembarkation and movement of fully equipped cumbersome spacesuits of astronauts inside the machine.

We propose to Elon Musk not to hurry up with sending the rocket to Mars with his first electric Tesla, which will only play beautiful music there, which nobody there will hear, both because of the lack of listeners and the atmosphere that transmits the sound itself.

We are ready to build exclusively for him a series of several of our space vehicles, which he will be able to send there in disassembled form and which, in the form of assembly kits, will wait on Mars for his personal arrival with the expedition. Upon arrival, Elon Musk with the crew will be able to assemble vehicles together with our instructions and attached special spacecraft and go to them personally to inspect the surroundings and places of interest of Mars.

In our opinion, this will be an example of a very effective use of resources and is really useful to Elon Musk and his expedition for work on Mars.

As an illustration of the possibilities of our development, we depicted the application of the new PARTISAN ONE MARS EDITION model on the surface of the Moon closer to us. There, by the way, it will be possible to conduct the first full-scale tests of the car before sending its kits to distant Mars.