Lexus is keen to celebrate 10 years of its high-performance F cars with a couple special edition models to mark the occasion. The automaker will bring dressed-up versions of the 2018 GS F sedan and RC F coupe to the 2018 Chicago Auto Show, each wearing a gray suit with blue trim inside and out. If this sounds familiar, it should – Lexus actually debuted the special models last year at the Tokyo Motor Show, though at the time we were told both cars would be exclusive to the Japanese market.

We’re happy to say that’s no longer the case, but with only 340 slated for the States, it will still be very difficult to get one. Specifically, Lexus will build 240 anniversary variants of its RC F coupe, which amounts to one car for every Lexus dealer in the United States. If you prefer four-door performance the numbers are even thinner, with just 100 GS F sedans getting the special treatment.

What does the anniversary package entail? It starts with a healthy coat of Nebula Gray paint on the outside, which is presented in a matte finish. Aside from being the first Lexus to feature such paint since the LFA, the manufacturer promises that “particular care was taken” to ensure it could withstand the rigors of automatic car washes. Less dull are the polished black 19-inch wheels and blue calipers behind them, a color theme which is carried over to the interior – in spades. 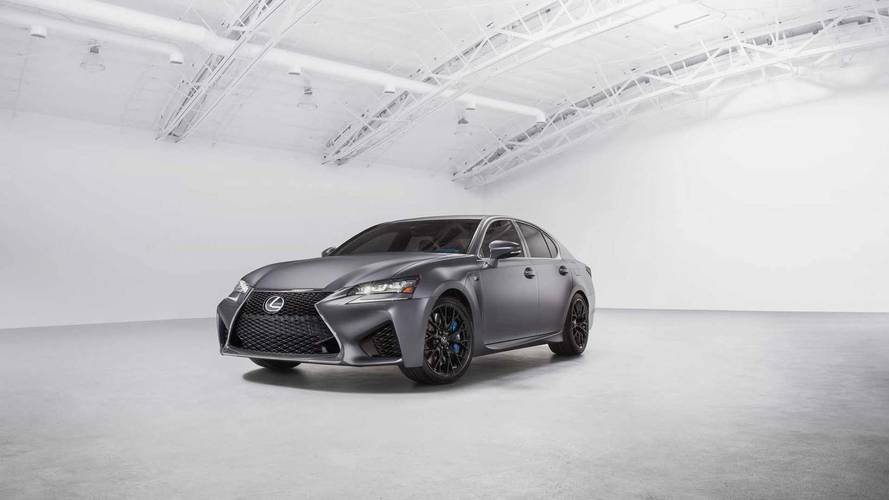 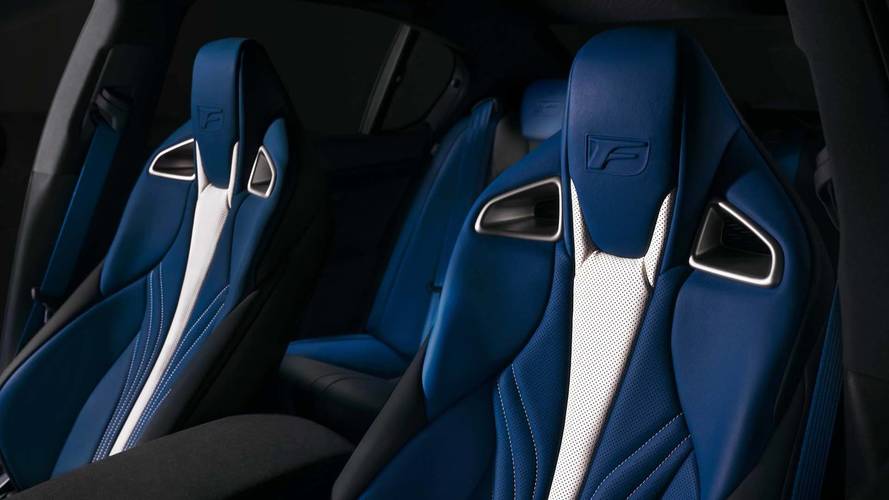 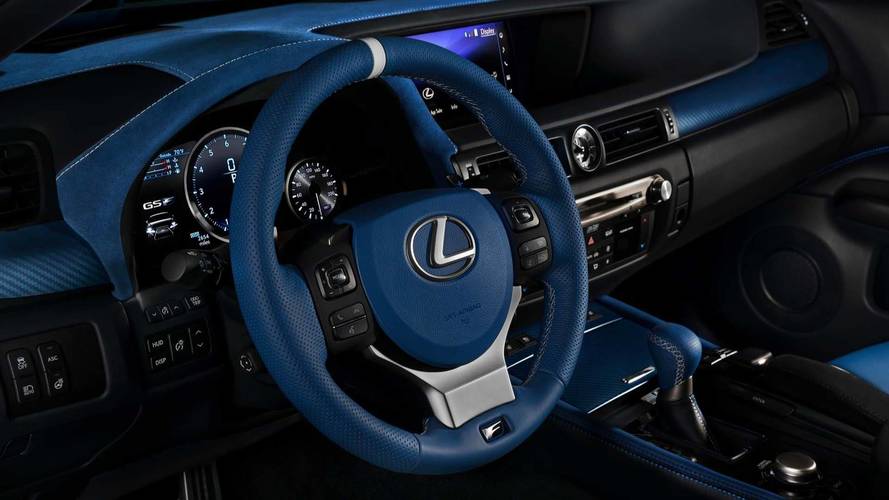 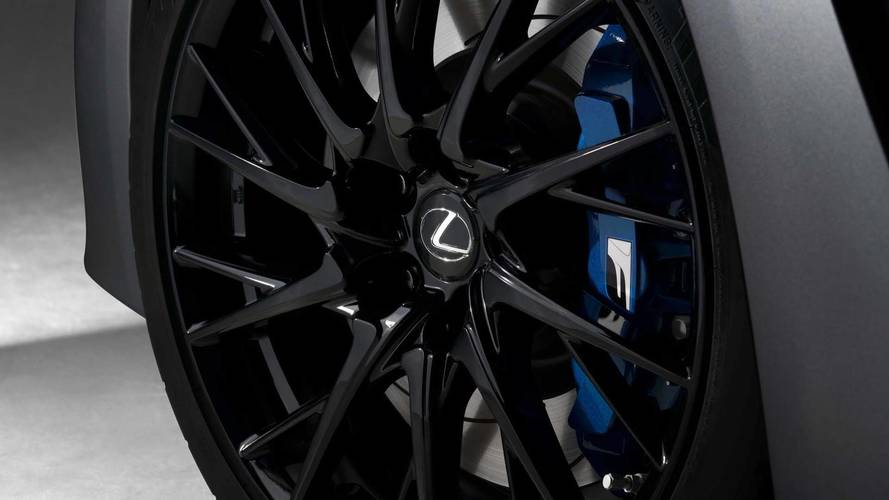 Blue leather and carbon fiber trim accents fill the otherwise gray/black passenger compartment on both cars. The steering wheel is blue, the shift knob is blue, door panels and sections of the dash are blue, and the front seats are blue with white accents and contrast stitching. Some blue trim also makes it to the rear seats, and of course each car receives an engraved plaque mounted on the driver door panel, signifying its special-edition status.

Sadly, the package is strictly an aesthetic upgrade. The mechanicals for both the RC F and GS F remain the same, but that still means a 467-horsepower (348 kW) 5.0-liter V8 that produces a satisfying snarl while shoving both cars to 60 mph in roughly 4.5 seconds. Transmission duties are handled by an eight-speed automatic that sends the power rearward.

Lexus doesn’t have pricing available yet for the anniversary models, but both will arrive to dealers this summer.

A Decade of Lexus Performance

Special Edition GS F and RC F Models Commemorate Ten Years of “F” Cars
CHICAGO  (Feb. 5, 2018) – The purest expression of Lexus performance, that was the goal of the Lexus “F” performance brand when it was introduced in 2008. Every vehicle with an “F” badge would set new standards for Lexus performance and help redefine the brand for a new generation of customers.

Today, Lexus adds another chapter to the “F” performance story with the introduction of the 2018 Lexus GS F and 2018 RC F 10th anniversary special editions that will be displayed for the first time in the U.S. at the 2018 Chicago Auto Show.

Set to arrive at dealers this summer, these limited-edition models come standard with unique features that make them stand out beyond their already exceptional performance.

The transformation of both cars starts with a coat of matte finish Nebula Gray paint. It’s the first use of matte paint on a production vehicle since the LFA supercar. Particular care was taken to assure that the unique finish was durable enough for the rigors of everyday use, including the ability to withstand the average mechanized car wash without degrading the quality of the finish. The dark gray finish contrasts with the standard polished black multispoke wheels wrapped in Michelin Pilot Sport PS2 tires. Blue brake calipers peek out from behind the 19-inch wheels to add a splash of color and hint at the changes found inside.

Open the door and you’re greeted by unique blue carbon fiber trim on the window switch panel and dashboard along with blue leather accents that give the interior the look of a custom-made exotic. It’s not an illusion either, as each car also gets engraved plaques certifying its limited-edition status. Only 240 10th anniversary RC Fs will be built, corresponding to the current number of U.S. Lexus dealers, while the 10th anniversary GS F is limited to just 100 units.

In the RC F coupe, the front sport seats get blue leather with white accents along with a blue accented shift knob, steering wheel and instrument panel hood. An embossed headliner is also part of the package to give the coupe’s interior an even more personalized appearance.

For the GS F sedan, the front seats mimic those in the RC while the rear seats also get a splash of blue leather on the side bolsters. Additional blue carbon trim is used on the center console along with blue suede dash trim and blue seatbelt straps. There is additional blue leather trim on the steering wheel, console and shift knob, although the GS F doesn’t get the same embossed headliner as the RC F.

All RC F coupes feature a 467-horsepower, 5.0-liter V8 that sends power to the rear wheels through an eight-speed automatic transmission. It’s capable of going from 0-to-60 mph in 4.4 seconds. A Torsen limited slip differential is standard along with variable dampers and multiple drive modes. A torque vectoring differential is also available as an option.

The GS F sedan also comes with a 467-horsepower, 5.0-liter V8, an eight-speed automatic transmission and rear wheel drive. A torque vectoring rear differential comes standard. The GS F is capable of delivering a 0-to-60 mph time of 4.5 seconds and up to 24 mpg on the highway. Variable dampers offer a choice between a smooth highway ride or a more responsive feel for spirited driving. A range of drive modes, including a full custom setting, allows the driver to adjust multiple settings with the turn of one knob.

Additional options packages will be required on both 10th anniversary models, but final pricing has not been determined.
Got a tip for us? Email: tips@motor1.com