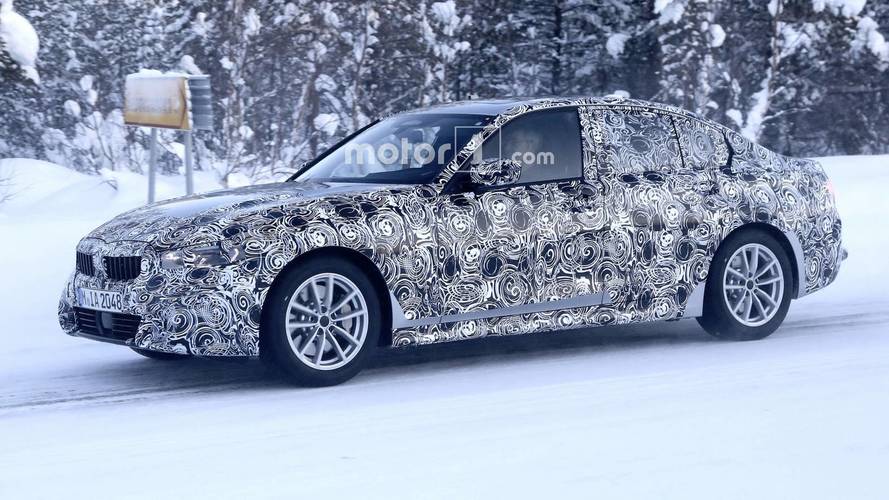 The next-generation BMW 3 Series is returning in a new set of spy photos, this time showing us a prototype of the car winter testing. The premium sedan is still hiding under a lot of camouflage, but it is not enough to fool us about the look of the new 3 – it is very much going to look like a smaller version of the 5 Series.

What makes us think like that? Looking at the front end of the prototype, the shape of the two-section headlights and the form of the LED daytime running lights mirror the lighting clusters found in the latest 5 Series. Also, the central section of the lower bumper grille features identical radar, while a small camera appears to be positioned between the “kidneys” in the upper grille, just like in the bigger sedan.

Interestingly, in some of the photos, the prototype wears snow chains on the rear axle, which suggests this is a RWD vehicle. This shouldn’t come as a surprise, as we already know the new 3 Series will be offered in both traditional RWD and xDrive-equipped AWD layouts.

Other similarities between the 5 Series and the next-gen 3 Series will include the CLAR architecture, which should bring a healthy weight reduction of about 88 pounds (40 kilograms) and improved torsional stability. A slightly longer wheelbase will result in more room for the passengers and possibly a bigger trunk.

Initially, the most powerful version of the 2019 3 Series will be M340i, using a 3.0-liter turbocharged inline-six producing 340 horsepower (254 kilowatts) and 369 pound-feet (500 Newton-meters) of torque. Two hybrid versions will also join the lineup, as well as a purely electric version.

The latest gossip indicates the model will also get a diesel-powered performance variant in the form of the M340d xDrive M Performance, which will be powered a 3.0-liter inline-six diesel. With 320 hp (238 kW) and tons of torque, it will fight for the crown in the diesel compact premium segment.