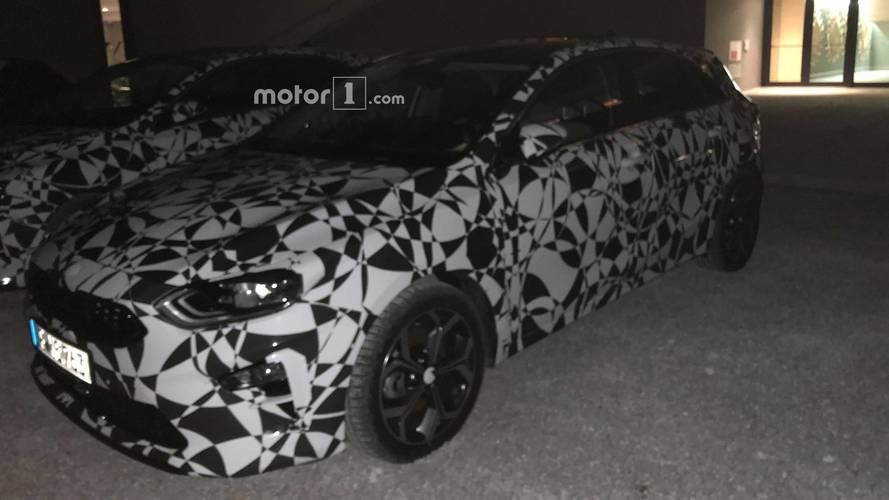 Several prototypes wearing a body wrap checked in at a hotel in Catalonia.

We are roughly a month away from the world premiere of the third-generation Kia cee’d at the Geneva Motor Show and now one of our loyal readers has sent us a batch of nocturnal spy shots with several prototypes. After spying on the Mercedes S-Class Coupe facelift back in July last year, Darryl saw these thinly covered test vehicles at a hotel in the same city of Sitges, which is located in Catalonia approximately 35 kilometers (22 miles) southwest of Barcelona.

You know a car is about to receive its world debut when it eschews the usual bulky camouflage in favor of a body wrap, like the new Ford Focus. While the latter has a colorful livery, the new cee’d is wearing a black and white psychedelic camo pattern that might make you feel a bit woozy if you stare at it for too long.

The latest spy content allows us to see from a very close distance the sportier front end of the cee’d in line with the Stinger and the Forte, which isn’t really all that surprising. There’s not much to say about the derrière, other than the Stonic-like appearance of the taillights featuring a different shape than those of the outgoing model.

Aside from having a good understanding of how the exterior is going to look like, we also have an idea of how the cabin will change thanks to older spy shots like the ones above. These are showing the interior cabin will go through some major changes, though don’t get your hopes up just yet as the center console will look quite bland with multiple stacks of simple buttons. One can only hope things will be a bit more exciting on the production car, but we wouldn’t hold our breath.

Getting back to the spy shots at hand, all of the prototypes were five-door hatchbacks, but it’s a known fact the wagon will also make the transition towards the new generation whereas the three-door coupe will bite the dust due to weak demand. That being said, the pro cee’d name will still live on as Kia has plans for a sportier wagon / shooting brake in the same vein as the promising Proceed (without the apostrophe) concept shown last year. A cee'd-based crossover is also on the agenda and we are curious to find out how it will be positioned in relation to the Sportage since the two will likely have roughly the same size.

Considering the 88th GIMS will open its doors on March 6 with the first press day, except to see teaser images of the new cee’d in the coming weeks.

Special thanks go to Darryl for sending us the images!