Record-Breaking Hispano-Suiza Hydroplane To Be Auctioned 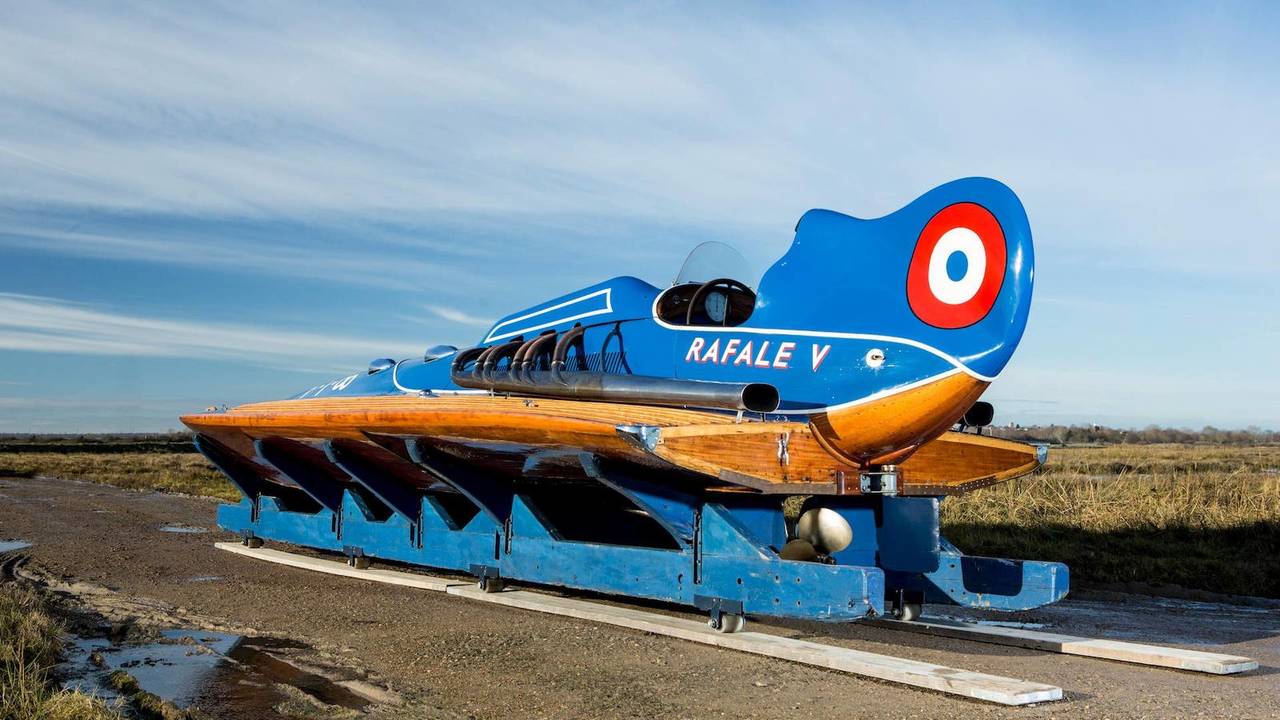 The incredible 36-liter 1930s powerboat that once raced along the Seine in Paris at more than 81 mph and survived WW2 hidden inside a barge.

Bonhams is set to auction the legendary, speed record-breaking 1934 "Rafale V" hydroplane race boat at its sale on Thursday February 8, at the Le Grand Palais in Paris.

The classic speed boat was bespoke-ordered new by bon vivant, businessman and racing enthusiast Emile Picquerez, and handbuilt by Chauvière boatworks in Vitry-sur-Seine, France. It was powered by a 36-liter V12 Hispano-Suiza aero engine, and initially named "Aurora."

Picquerez was the director of the Tecalemit company, a major supplier of equipment for cars and aircraft, and a great fan of both yachting and motor boating. Unusually for the time, he ignored the barriers which separated the two disciplines at the time, and was responsible for several famously innovative race boats in the period between the wars.

A return on the horizon:

Aurora, named after his beautiful Argentinian wife, caused a sensation when unveiled to the public in July 1935. Its beautifully crafted double-diagonal mahogany planked hull, 28-feet (8.5-meters) long, was pinned together by thousands of countersunk copper rivets.

Its Hispano-Suiza engine was specially developed for unlimited-class powerboat competition by the Bois-Colombes-based manufacturer, under the technical supervision of Hispano's chief engineer, Marc Birkigt, with subsequent preparation by Hispano technicians Guido Cattaneo and Gabriel Raget (the latter an accomplished powerboat racer).

In mid-summer 1936 – piloted by Picquerez himself – Aurora won the President of the Republic's prize at the Cannes Semaine Nautique, averaging 90.34 kph (56.13 mph) over the 12-kilometer (7.4-mile) course. In July 1938, "Aurora" became the only unlimited-class entry to compete in the Lyons-Marseilles-Cannes race, which included both inland waterways and the open sea.

Aurora was sold subsequently to Commodore Gerard who modified the boat into its current form to improve high speed stability, adding the Tricoloure Cockade to her tail and renaming it "Rafale V" (rafale meaning "gust" in French, as in "gust of wind".) In Gerard's hands, Rafale V took part in races and speed events in Monte Carlo, Paris and upon Lac Leman at Geneva.

Rafale V survived World War 2 hidden in a barge on the Seine and in 1965 was acquired by Robert, the Marquis de Goulaine, who then sold her to car and aeroplane collector Ed Jurist of Nyack, New Jersey, USA. She was shipped to America onboard the SS Eurymachus, arriving on May 19, 1969.

Ed Jurist associate George Huguely Jr then stored Rafale V in a heated barn on his farm in Maryland, and it spent some time on display in Judge John C North II's private museum before, in November 1987, being offered for sale by Ed Jurist.

It was later bought by the present British vendor, who had Rafale V rebuilt preserving almost all of her original fabric.