But then again, the performance wagon should be a hoot on just about any type of road.

While it’s no 695-hp RS6 Avant Performance Nogaro Edition, the RS4 Avant is still a forced to be reckoned with and there’s more to like about the wagon beyond its V6 engine. Loaded with Audi’s latest and greatest tech, the high-performance family hauler lives up to its four-ring badge in terms of refinement and luxury while providing the generous amount of space you’d want from this practical body style.

Watch More Of The RS4: 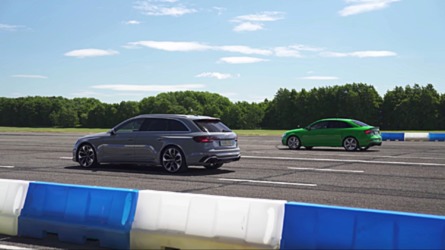 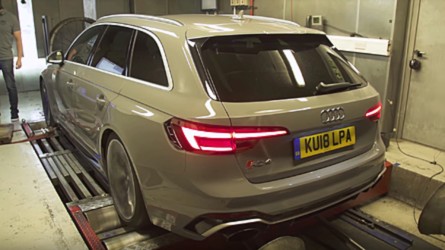 The attached video, which appears to have been shot in Switzerland, goes to show the menacing black RS4 is a blast to drive up a hill on a fairly narrow road. We also get to see the 450-hp Avant performing some mini drifts while exiting the corners where the tarmac is damp to show the rear-biased Quattro is the best of both worlds by providing the stability you would come to expect from an all-wheel drive system sprinkled with some of the magic of a RWD car.

If you crank up the volume (which we would recommend), you can better hear the biturbo 2.9-liter engine playing its raspy soundtrack. That might convince more folks the decision made by Audi to switch from the old naturally aspirated V8 engine to the new downsized V6 with forced induction might not have been a mistake after all.

With more and more automakers interested in setting records at the Pikes Peak International Hill Climb, we certainly wouldn’t mind seeing Audi there with the RS4 Avant gunning for the fastest wagon title, if there even is such a thing. Other members of the vast Volkswagen Group will be there this year, with the VW core brand announcing plans to try and break the record for an electric vehicle. Bentley will also be there with a W12-powered Bentayga at the start in an attempt to claim the title for the fastest SUV on those 156 corners of the challenging 12.42-mile Colorado Springs hill climb event.